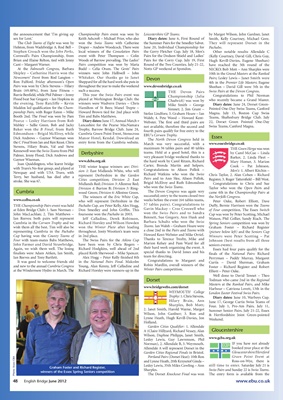 The Club Teams of Eight was won by won the Swiss Teams with Catherine the Summer Pairs for the Smedley Salver. They will represent Dorset in the

Helston, from Wadebridge A. Rod Bell – Draper – Andrew Woodcock. There were June 20, Individual Championship for Pachabo.

Cant – Margaret Warner. Pairs competition was won by Maria Round of the Two Counties. July 21-22, have reached the 5th round of the

Ron Fulford. Friday afternoon’s Open Sheppard for all the hard work she puts in 4th in the Premier Life Masters; Eugene

Pairs was won by Chris Stevens – Hilary throughout the year to make the weekend www.devonbridge.co.uk Sheehan – David Gill were 5th in the

Brain (69.48%), from June Fitness – such a success. THE Devon Pairs Swiss Pairs at the Devon Congress.

Flood beat Sue Gregory – Ian Hopkins in played at Workington Bridge Club: the Chadwick) was won by who recently became a Grand Master.

Baker won the B Final, from Ruth Trophy, Barrow Bridge Club. June 24, fourth pairs qualify for free entry to the

the C Final from Jan and Ken Keast. Chris entry form from the Cumbria website. March was very successful, with a www.essexbridge.co.uk

Kennewell won the Swiss Teams from Phil teams. Held at a good hotel, this is a

with Truro’s No-fear group, and played at Congratulations to Alison Pollok –

Newquay and with U3A Truro, with Richard Watkins who won the Swiss

Terry, her husband, has died after a Pairs and to Ann Slee, Alison Pollok,

stroke. She was 67. Brigid McElroy and Ruth Edmondson

Division 4: Burton B; Division 5: Ring- who won the Swiss Teams. Taylor who won the Open Pairs and

The winners of the Eric White Cup, successful; entry to the teams closed two the Norfolk Congress.

www.ccdba.co.uk who will represent Derbyshire in the weeks before the event (64 tables teams, Peter Oake, Robert Elliott, Dave

John MacLachlan; 2. Tim Matthews – foursome won the Pachabo in 2003. won the Swiss Pairs and to Sandra Cup was won by Peter Scotting, Michael

wish them all the best. Tim will also be won the Winter Plate after leading Teams. Ian Walsh – Graham Hoare were Graham Foster – Richard Register

representing Cumbria in the Pachabo throughout. Jonty Wootten’s team were a close 2nd in the Pairs and Teams with (picture below left) and the Seniors Cup

Cup having won the County Teams of in 2nd place. Howard Kent-Webster and Mike Orriel. Winners were Peter Scotting – Pat

Four with team-mates Babs Matthews, The Swiss Pairs for the Atkins Cup Thanks to Terence Treeby, Mike and Johnson (best results from all three

John Farmer and David Strawbridge. have been won by Chris Rogers – Marion Kelsey and Pam Ward for all seniors events).

Again, we wish them well. The losing Richard Hodgkins, well ahead of 2nd their hard work organising the event. A Essex had four pairs qualify for the

It was good to welcome friends old in the National Pairs Final. Malcolm Congratulations to Margaret and Curtis – David Sherman, Graham

and new to the annual Cumbria Congress Young, Alan Kenny, Jeff Calladine and Robin Mardlin, overall winners of the

at the Windermere Hydro in March. The Richard Horsley were runners-up in the Winter Pairs competition.

Dorset Todman who came 2nd in the Regional

Masters at the Ranked Pairs, and Mike

Norman), 2. Allendale B, 3. Weymouth. IF you have not already

and Lynne Heath, 20th Krzysztof Ginda – Ross-on-Wye, there is