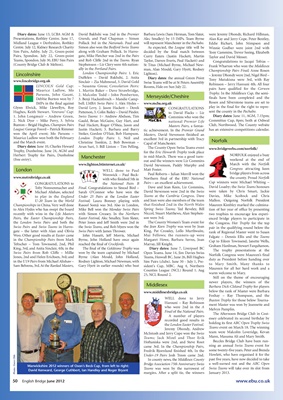 Midland League v Derbyshire, Rothley Pollack 3rd in the Nationals. Paul and will represent Manchester in the Pachabo. Eddie Richart, John Stimpson and

Merseyside/Cheshire finals have been completed and the

IMPs in the final against bell. LMBA Swiss Pairs: 1. Alex Hydes – www.mcba.org.uk Rosen and Silverstone teams are set to

Herbert Trophy for Pairs, Dunholme in mid-March. There was a good turn- NORFOLK enjoyed a busy

Manchester weekend at the end of

out and the winners were Liz Commins

www.lighton.btinternet.co.uk/ David Stevenson, Paddy Murphy and March with the Norfolk

www.metrobridge.co.uk with who finished 5th in Northern final of the EBU National the county. Proud Norfolk

CONGRATULATIONS to the National Pairs B Pairs – an excellent achievement. Cup winners were Michael Whiting –

Michael Alishaw, selected Sarah O’Connor who have won the David Stevenson were 2nd in the Swiss were taken by Chris Smart, Jackie

to play in the England Under 25 Pairs at the London Easter Teams at the Cumbria Congress. Dave Davies, Mike Scoltock and Chris

U-20 Team in the World Festival; Laura Bonney playing with and Jean were also members of the team Mallon. Outgoing Norfolk President

to Alex Hydes who has swept the board Mike Bell won the Monday Swiss Pairs Spring Swiss Teams; Ted Reveley, Bill tion of her year of office by presenting

the London Swiss Pairs and both the Peter Jones and Jeff Smith were 2nd in The County Women’s Team event for the Congress. Her Trophy for the top

Swiss Pairs and Swiss Teams in Harro- the Swiss Teams, and Rob Myers won the the Jean Keen Trophy was won by Joan pair in the qualifying round below the

King, 3rd, and Anita Sinclair, 4th; in the The final of the Goldstone Trophy was Diary dates: June 7, Liverpool BC The trophy presentations at the

duty as President before handing over

Sam Behrens, 3rd. At the Ranked Masters, Gary Hyett in earlier rounds) who beat to Mary Smith. Many thanks to

Counties League (NCL) Round 1. Aug Maureen for all her hard work and a

Still on the theme of encouraging

newer players, the winners of the

www.middlesexbridge.co.uk below the rank of Master were Barbara

Foxhay – Ray Thompson, and the

WELL done to Jerry Buxton Trophy for those below Tourna-

ment Master was won by Jeannette and

who were 2nd in the A

Final of the National Pairs.

The Afternoon Bridge Club in Cost-

A number of players

essey celebrated its second birthday by

Hoftaniska were 2nd, and Steve Root Beccles Bridge Club have been run-

came 3rd. In the Championship Pairs, ning an annual Swiss Teams event for

Fredrik Bjornlund finished 4th. In the some twenty-five years. Peter and Brenda

Under-19 Pairs Josh Treon came 2nd. Howlett, who have organised it for the

In county news, the Middlesex County past five years, have now decided to take

Warwickshire 2012 winners of Oxon’s Beck Cup, from left to right:

margins. After a split tie, the winners January 2013.