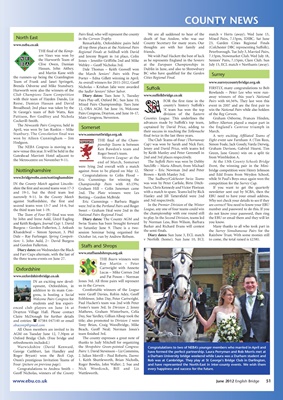 Pairs final, who will represent the county We are all saddened to hear of the match v Herts (away). Wed June 13,

North East in the Corwen Trophy. death of Sue Anslow, who was our Mixed Pairs, 7.15pm, IDIBC. Sat June

all top three places at the National Pairs thoughts are with her family and (Colchester DBC representing Suffolk),

the Hurworth Team of Jones – Jennifer Griffiths 2nd and Mike as he represents England in the Seniors Seniors’ Pairs, 7.15pm, Clare Club. Sun

the runners-up being the Cramlington

Team of Frank and Janet Springett, As overall winners for 2011-2012, Geoff www.surreycountybridge.org.uk

Hurworth were also the winners of the Suffolk FIRSTLY, many congratulations to Bob

with their team of Hayden Dando, Liz Pairs Play-off, Oxford BC. Sun June 10, FOR the first time in the Pairs with 64.56%. They last won this

Broadhead; 2nd place was taken by the 12, OBA AGM. Sat June 16, Welcome ‘A’ team has won the top win the National Pairs while also holders

St George’s team of Bob Watts, Ken Pairs Congress, Drayton, and June 16-17, division of the Eastern of the Reg Corwen.

The Newcastle Pairs Congress, held in captained by David Price, adding to the England’s Camrose triumph in

their success in reaching the Tollemache March.

Stanbury. The Consolation final was www.somersetbridge.org.uk final twice in the last three years. A very exciting Affiliated Teams of

THE final of the Cham-

The NEBA Congress is moving to a Jenny and David Price, with teams led Graham Davison, Gabriel Hearst, Tim

new venue this year. It will be held in the by Keith Manley and Peter Gemmell in Green, Jane Green) win on a split tie

Gateshead Marriott Hotel adjacent to 2nd and 3rd places respectively. from Wimbledon A.

Western League: at the

the Metrocentre on November 9-11. The Suffolk Pairs was won by Debby At the 13th County Schools Bridge

were lying 2nd overall with a match Sutcliffe – Maria Allnutt, from Michael Event, the winning pair in the Mini-

Nottinghamshire against Avon to be played on May 12. Sherer – Eric Newman 2nd and Peter bridge competition were Henry Johnson

www.bridgewebs.com/nottinghamshire The Sudbury/Colchester Swiss Teams while St Paul’s Boys once again won the

Eric Cummings for winning the

IN the County Match against Lincoln- Championship Pairs with 65.15%; was won by Peter Carlisle, Birte Ditch- competition for the Surrey Cup.

shire the first and second teams won 17-3 Graham Hill – Colin Juneman came burn, Chris Kennedy and Victor Floriean If you want to get the quarterly

and 19-1, but the third team lost 2nd. The Plate winners were Les with a match to spare. Teams led by Rick newsletter sent out by SCBA, then the

narrowly 9-11. In the County Match Botting – Gordon McBride Hanley and Jill Tattersfield were 2nd EBU need to have your email address.

against Staffordshire, the first and Eric Cummings – Barbara Biggin and 3rd respectively. Why not check your details to see if they

second teams won 13-7 and 14-6, but were 3rd in the Portland Pairs and Roger In the Premier Division of the Winter are correct? You need to know your EBU

the third team lost 1-19. Sweet – Graham Heal were 2nd in the League, any one of four teams could win number and password to do this. If you

The Team of Four KO final was won National Pairs Regional Final. the championship with one round still do not know your password, then ring

by John and Irene Auld, Lloyd Eagling Diary dates: The County AGM and to play. In the Second Division, teams led the EBU or email them and they will let

Burgess – Gordon Fullerton, 2. Ankush to Saturday June 9. There is a two- Barker and Richard Evans will contest Many thanks to all who took part in

Khandelwal – Simon Spencer, 3. Phil session Seminar being organised for the semi-finals. the Surrey Simultaneous Pairs for the

and Gordon Fullerton. Staffs and Shrops

Diary dates: on Wednesdays the Black

and Farr Cups alternate, with the last of www.staffsandshrops.org.uk

the three teams events on June 27. THE Bearn winners were

IN an exciting new devel- Jones 3rd. All three pairs will represent

opment, Oxfordshire, in us in the Corwen.

addition to its main Con- Comfortable winners of the League

All Oxon members are invited to its Beach, Geoff Neal; Norman Jones’s

Oxford Bridge Club. (Free bridge and The county expresses a great note of

refreshments included.) thanks to Judy Mitchell for organizing

Warwickshire (David Kenward, the Shropshire Green-pointed Congress: Congratulations to two of NEBA’s younger members who married in April and

Four (picture on previous page). Roger Bowles, John Waller; 2. Sue and and have represented the North-East in inter-county events. We wish them

Congratulations to Andrea Smith – Nick Woodcock, Bill and Liz every happiness and success for the future.