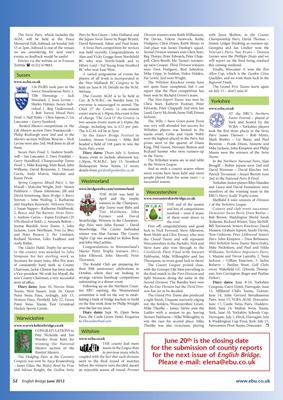 The Swiss Pairs, which includes the Pairs by Ben Green – John Holland, and Division winners were Keith Williamson, with Joyce Skelton, in the County

15 at 2pm. Ashtead is one of the venues A Swiss Pairs competition for novices 2nd place was James Dunlop’s squad. Georgina and Ian Lineker won the

we are considering for next year’s was held recently. Congratulations to Second Division winners were Chris Starr, Veteran’s Pairs. Sue Evans – Dennis

events, so feedback would be useful Alan and Vicky Greggs from Northfield Reg Thorpe, Peter Edwards, Peter Chap- Loynes won the Phillipps Heats and we

Entries via the website or to Frances BC who won North-South and to pell, Chris Booth, Mo Turner; runners- will report on the final being resolved

BC who won East-West. were Don Hodgson, Rod Johnston, Finally, Worcester A won the Ron

Sussex A varied programme of events for Mike Cripp, Jo Seddon, Helen Holden, Allen Cup, which is the Garden Cities

players of all levels is incorporated in Pat Lewis; 2nd were Wright. Qualifier, and we wish them luck in the

www.sccba.co.uk the West Midlands BC Congress to be The Wiltshire Knockout events have Regional Finals.

134 PAIRS took part in the held on June 8-10. Details on the W.M. not quite been completed, but I can The Grand Prix Teams starts again

Senior Simultaneous Pairs: 1. Website. report that the Plate competition has on July 11 – don’t miss it!

Tilly Hennings – Jack The County AGM is to be held at been won by Richard Gwyer’s team.

Shirley Halmer. Sussex Indi- everyone is encouraged to attend. The

Lancaster – Gerry Stanford. two-session event) starts at 1.45pm; the The Wilts / Avon Green-point Event York and hosted by the

Ranked Masters competition: in the charge, including tea, is £12 per pair. was very well attended but success for YCBA – Yorkshire players

Life Masters section Dave Nastaszczuk – The A.G.M. wil be at 5pm. Wiltshire players was limited to the took the first three places in the Swiss

Philip Roxburgh were 2nd and in the At the Easter Bridge Festival in teams event. Colin and Gayle Webb Pairs: James Thrower – Rob Myers,

Levine were also 2nd. Well done to all of headed a field of 148 pairs to win the prizes went to the quartet of Diana Brereton – Frank Dixon. Annette and

Karen Pryor. people played than for some years – a 2nd in the National Pairs B Final.

Fishburn – Diane Johnstone, Jill and Worcestershire members of the winning team in the

Sowton – John Watling, 2. Katharine April and the trophy www.worcestershirebridge.co.uk Sheffield A were winners of Division

and Stephen Kennedy. Welcome Pairs: winners in the Champion- THE end of the season 1 of the Yorkshire League.

The Gladys Hakki Trophy for services Congratulations to Westmorland’s Steve have also won through to the Mike Nicholson, and Paul and Hilda

Secretary for many years. After five years Thornton. Thompson, so more good luck to them! Jackson – Gillian Emerson, 3. Jackie

Chairman, Jackie Clinton has been made their 50th anniversary celebrations in with the Grumpy Old Men prevailing in event: Wakefield GC (Dennis Thomp-

a Vice-president. We wish Joy Mayall, the October, where they are looking to the final match in the First Division and son, Ann Carrington, Roger and Pauline

Wortley from Kent for

Ranked Masters. in previous years, which,

The Fledgling Pairs at the Coventry coupled with the fact that each division for the next issue of English Bridge.

Congress was won by Anca Kranenborg

went to the final round of matches

before the winners were decided, meant

and Adrian Knight; the Godiva Swiss an enjoyable season all round. Premier