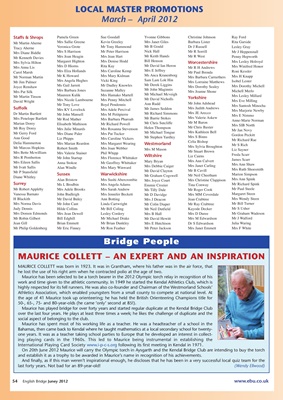 MAURICE COLLETT – AN EXPERT AND AN INSPIRATION

MAURICE COLLETT was born in 1923. It was in Grantham, where his father was in the air force, that

he lost the use of his right arm when he contracted polio at the age of two.

work and time given to the athletic community. In 1949 he started the Kendal Athletics Club, which is

highly respected for its fell runners. He was also co-founder and Chairman of the Westmorland Schools’

Athletics Association, which enabled youngsters from a small county to compete at national level. At

the age of 41 Maurice took up orienteering; he has held the British Orienteering Champions title for

over the last four years. He plays at least three times a week; he likes the challenge of duplicate and the

social aspect of belonging to the club.

Maurice has spent most of his working life as a teacher. He was a headteacher of a school in the

Bahamas, then came back to Kendal where he taught mathematics at a local secondary school for twenty-

one years. It was as a teacher taking school parties to Europe that he developed an interest in collect-

ing playing cards in the 1960s. This led to Maurice being instrumental in establishing the

and establish it as a trophy to be awarded in Maurice’s name in recognition of his achievements.

And finally, as if this man weren’t inspirational enough, he discloses that he has been in a very successful local quiz team for the

last forty years. Not bad for an 89-year-old! (Wendy Ellwood)