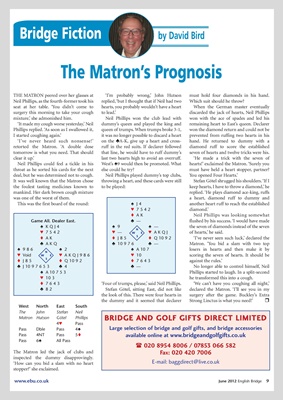 THE MATRON peered over her glasses at ‘I’m probably wrong,’ John Hutson must hold four diamonds in his hand.

Neil Phillips, as the fourth-former took his replied, ‘but I thought that if Neil had two Which suit should he throw?

seat at her table. ‘You didn’t come to hearts, you probably wouldn’t have a heart When the German master eventually

surgery this morning to take your cough to lead.’ discarded the jack of hearts, Neil Phillips

mixture,’ she admonished him. Neil Phillips won the club lead with won with the ace of spades and led his

‘It made my cough worse yesterday,’ Neil dummy’s queen and played the king and remaining heart to East’s queen. Declarer

Phillips replied. ‘As soon as I swallowed it, queen of trumps. When trumps broke 3-1, won the diamond return and could not be

I started coughing again.’ it was no longer possible to discard a heart prevented from ruffing two hearts in his

‘I’ve never heard such nonsense!’ on the ®A-K, give up a heart and cross- hand. He returned to dummy with a

retorted the Matron. ‘A double dose ruff in the red suits. If declarer followed diamond ruff to score the established

tomorrow is what you need. That should that line, he would have to ruff dummy’s seven of hearts and twelve tricks were his.

clear it up.’ last two hearts high to avoid an overruff. ‘He made a trick with the seven of

Neil Phillips could feel a tickle in his West’s ´9 would then be promoted. What hearts!’ exclaimed the Matron. ‘Surely you

throat as he sorted his cards for the next else could he try? must have held a heart stopper, partner?

deal, but he was determined not to cough. Neil Phillips played dummy’s top clubs, You opened Four Hearts.’

It was well known that the Matron chose throwing a heart, and these cards were still Stefan Götel shrugged his shoulders. ‘If I

the foulest tasting medicines known to to be played: keep hearts, I have to throw a diamond,’ he

was one of the worst of them. a heart, diamond ruff to dummy and

This was the first board of the round: ´ J4 another heart ruff to reach the established

Game All. Dealer East. ® — flushed by his success. ‘I would have made

® 82 Stefan Götel, sitting East, did not like declared the Matron. ‘I’ll see you in my

the look of this. There were four hearts in surgery after the game. Buckley’s Extra

the dummy and it seemed that declarer Strong Linctus is what you need!’ r

‘How can you bid a slam with no heart E-mail: baggdirect@live.co.uk