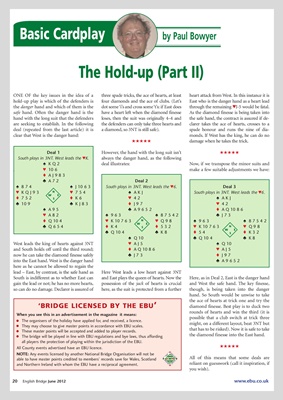 ONE OF the key issues in the idea of a three spade tricks, the ace of hearts, at least heart attack from West. In this instance it is

hold-up play is which of the defenders is four diamonds and the ace of clubs. (Let’s East who is the danger hand as a heart lead

the danger hand and which of them is the dot some ‘i’s and cross some ‘t’s: if East does through the remaining ™J-5 would be fatal.

hand with the long suit that the defenders loses, then the suit was originally 4–4 and the safe hand, the contract is assured if de-

are seeking to establish. In the following the defenders can only take three hearts and clarer takes the ace of hearts, crosses to a

deal (repeated from the last article) it is a diamond, so 3NT is still safe). spade honour and runs the nine of dia-

clear that West is the danger hand: monds. If West has the king, he can do no

HHHHH damage when he takes the trick.

Deal 1 However, the hand with the long suit isn’t HHHHH

South plays in 3NT. West leads the ™K. always the danger hand, as the following

´ KQ2 deal illustrates: Now, if we transpose the minor suits and

here as he cannot be allowed to regain the

lead – East, by contrast, is the safe hand as Here West leads a low heart against 3NT

South is indifferent as to whether East can and East plays the queen of hearts. Now the Here, as in Deal 2, East is the danger hand

gain the lead or not; he has no more hearts, possession of the jack of hearts is crucial and West the safe hand. The key finesse,

so can do no damage. Declarer is assured of here, as the suit is protected from a further though, is being taken into the danger

hand. So South would be unwise to take

the ace of hearts at trick one and try the

‘BRIDGE LICENSED BY THE EBU ’ diamond finesse. Best play is to duck two

rounds of hearts and win the third (it is

possible that a club switch at trick three

• The organisers of the holiday have applied for, and received, a licence. might, on a different layout, beat 3NT but

• They may choose to give master points in accordance with EBU scales. that has to be risked). Now it is safe to take

• These master points will be accepted and added to player records. the diamond finesse into the East hand.

• The bridge will be played in line with EBU regulations and bye laws, thus affording

all players the protection of playing within the jurisdiction of the EBU.

All County events advertised have an EBU licence. HHHHH

NOTE: Any events licensed by another National Bridge Organisation will not be

able to have master points credited to members’ records save for Wales, Scotland All of this means that some deals are

and Northern Ireland with whom the EBU have a reciprocal agreement. reliant on guesswork (call it inspiration, if