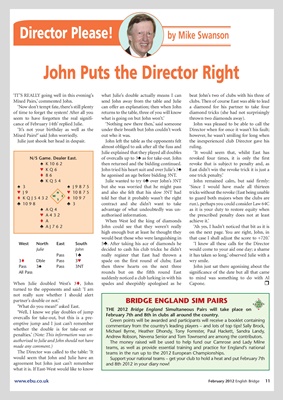 Mixed Pairs,’ commented John. send John away from the table and Julie clubs. Then of course East was able to lead

‘Now don’t tempt fate, there’s still plenty can offer an explanation; then when John a diamond for his partner to take four

of time to forget the system! After all you returns to the table, three of you will know diamond tricks (she had not surprisingly

seem to have forgotten the real signifi- what is going on but John won’t.’ thrown two diamonds away).

cance of February 14th’ replied Julie. ‘Nothing new there then,’ said someone John was pleased to be able to call the

‘It’s not your birthday as well as the under their breath but John couldn’t work Director when for once it wasn’t his fault;

Mixed Pairs?’ said John worriedly. out who it was. however, he wasn’t smiling for long when

Julie just shook her head in despair. John left the table as the opponents felt the inexperienced club Director gave his

almost obliged to ask after all the fuss and ruling.

Julie explained that they played all doubles ‘It would seem that, whilst East has

N/S Game. Dealer East. of overcalls up to 3´ as for take-out. John revoked four times, it is only the first

´ K 10 6 2 then returned and the bidding continued. revoke that is subject to penalty and, as

t 86 he agonised an age before bidding 3NT. one trick penalty.’

™ A432 authorised information. the prescribed penalty does not at least

t A When West led the king of diamonds achieve it.’

® AJ762 John could see that they weren’t really ‘Ah yes, I hadn’t noticed that bit as it is

high enough but at least he thought they on the next page. You are right, John, in

would beat those who were languishing in that case I shall adjust the score to +720.’

West North East South 5®. After taking his ace of diamonds he ‘I knew all these calls for the Director

Julie John decided to cash his club tricks: he didn’t would come to your aid one day; a shame

Pass 1® really register that East had thrown a it has taken so long,’ observed Julie with a

3t Dble Pass 3™ spade on the first round of clubs; East wry smile.

turned to the opponents and said: ‘I am

not really sure whether I should alert

‘What do you mean?’ asked East.

THE 2012 Bridge England Simultaneous Pairs will take place on

‘Well, I know we play doubles of jump

February 7th and 8th in clubs all around the country.

overcalls for take-out, but this is a pre-

commentary from the country’s leading players – and lots of top tips! Sally Brock,

penalties.’ (Note: This information was un- Andrew Robson, Nevena Senior and Tom Townsend are among the contributors.

made any comment.) teams, as well as provide essential training and practice for England’s national

The Director was called to the table: ‘It teams in the run up to the 2012 European Championships.

agreement but John just can’t remember and 8th 2012 in your diary now!

what it is. If East-West would like to know