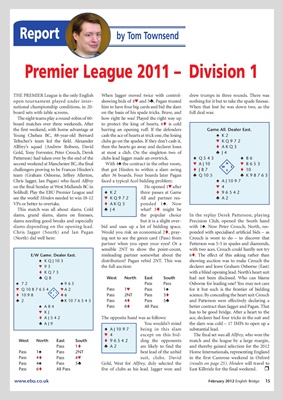 THE PREMIER League is the only English When Jagger moved twice with control- drew trumps in three rounds. There was

open tournament played under inter - showing bids of 4™ and 5®, Pagan trusted nothing for it but to take the spade finesse.

national championship conditions, in 20- him to have four big cards and bid the slam When that lost he was down two, as the

board sets with table screens. on the basis of his spade tricks. Brave, and full deal was:

The eight teams play a round-robin of 60- how right he was! Played the right way up

board matches over three weekends. After to protect the king of hearts, 6t is cold

the first weekend, with home advantage at barring an opening ruff. If the defenders Game All. Dealer East.

Young Chelsea BC, 88-year-old Bernard cash the ace of hearts at trick one, the losing ´ K2

Teltscher’s team led the field. Alexander clubs go on the spades. If they don’t cash it, ™ KQ972

Gold, Tony Forrester, Peter Crouch, Derek at most a club. On the singleton two of ® J4

Patterson) had taken over by the end of the clubs lead Jagger made an overtrick. ´ Q543 ´ 86

This match was all about slams. Cold ® J4 what? 3t might be

slams needing good breaks and especially but it is a slight over- Precision Club, opened the South hand

slams depending on the opening lead. bid and uses up a lot of bidding space. with 1´. Now Peter Crouch, North, res-

Chris Jagger (South) and Ian Pagan Would you risk an economical 2t, pray- ponded with specialised artificial bids – as

(North) did well here: ing not to see the green card (Pass) from Crouch is wont to do – to discover that

partner when you open your eyes? Or a Patterson was 5-5 in spades and diamonds,

sensible 2NT to show the point-count, with two aces. Crouch could hardly not try

E/W Game. Dealer East. misleading partner somewhat about the 6t. The effect of this asking rather than

´ K Q J 10 3 distribution? Pagan rebid 2NT. This was showing auction was to make Crouch the

® Q8 West North East South had not been disclosed. Who can blame

´ A84 Pass 6t All Pass better contract than Jagger and Pagan. That

™ KJ has to be good bridge. After a heart to the

t AJ542 The opposite hand was as follows: ace, declarer had four tricks in the suit and

™ 4 except on this bid - The final set was all Allfrey, who won the

West North East South t 96542 ding the opponents match and the league by a large margin,

Pass 4´ Pass 5® Gold, West for Allfrey, duly selected the (results on page 25). Hinden will travel to

Pass 6t All Pass five of clubs as his lead. Jagger won and East Kilbride for the final weekend. r