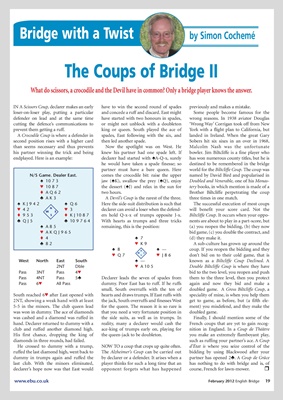 The Coups of Bridge II

What do scissors, a crocodile and the Devil have in common? Only a bridge player knows the answer.

IN A Scissors Coup, declarer makes an early have to win the second round of spades previously and makes a mistake.

loser-on-loser play, putting a particular and concede a ruff and discard. East might Some people become famous for the

defender on lead and at the same time have started with two honours in spades, wrong reasons. In 1938 aviator Douglas

prevent them getting a ruff. king or queen. South played the ace of York with a flight plan to California, but

A Crocodile Coup is where a defender in spades, East following with the six, and landed in Ireland. When the great Gary

second position rises with a higher card then led another spade. Sobers hit six sixes in an over in 1968,

than seems necessary and thus prevents Now the spotlight was on West. He Malcolm Nash was the unfortunate

his partner winning the trick and being knew his partner had one spade left. If bowler. Jim Biltcliffe is a fine player who

endplayed. Here is an example: declarer had started with ´A-Q-x, surely has won numerous county titles, but he is

he would have taken a spade finesse; so destined to be remembered in the bridge

partner must have a bare queen. Here world for the Biltcliffe Coup. The coup was

® AK3 A Devil’s Coup is the rarest of the three. three times in one match.

™ 3 declarer can avoid a loser when the defend- will benefit your score card. Not the

Pass 3NT Pass 4™ bid to the two level, you reopen and push

Pass 4NT Pass 5® Declarer leads the seven of spades from them to the three level, then you protect

Pass 6™ All Pass dummy. Poor East has to ruff. If he ruffs again and now they bid and make a

small, South overruffs with the ten of doubled game. A Gross Biltcliffe Coup, a

South reached 6™ after East opened with hearts and draws trumps. If East ruffs with speciality of mine, is when you help them

2NT, showing a weak hand with at least the jack, South overruffs and finesses West get to game, as before, but (a fifth ele-

5-5 in the minors. The club queen lead for the queen. The reason it is so rare is ment) you misdefend, and they make the

was won in dummy. The ace of diamonds that you need a very fortunate position in doubled game.

was cashed and a diamond was ruffed in the side suits, as well as in trumps. In Finally, I should mention some of the

hand. Declarer returned to dummy with a reality, many a declarer would cash the French coups that are yet to gain recog-

club and ruffed another diamond high. ace-king of trumps early on, playing for nition in England. In a Coup de Théâtre

His first chance, dropping the king of the queen-jack to be doubleton. you make an extremely flamboyant play,

diamonds in three rounds, had failed. such as ruffing your partner’s ace. A Coup

He crossed to dummy with a trump, NOW TO a coup that crops up quite often. d’État is where you seize control of the

ruffed the last diamond high, went back to The Alzheimer’s Coup can be carried out bidding by using Blackwood after your

dummy in trumps again and ruffed the by declarer or a defender. It arises when a partner has opened 2®. A Coup de Grâce

last club. With the minors eliminated, player thinks for such a long time that an has nothing to do with bridge and is, of

declarer’s hope now was that East would opponent forgets what has happened course, French for lawn-mower. r