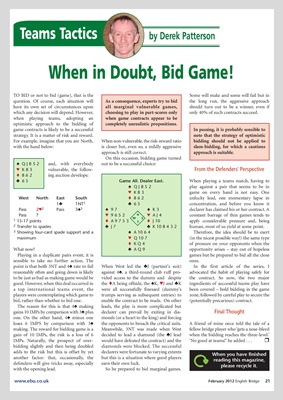 When in Doubt, Bid Game!

TO BID or not to bid (game), that is the Some will make and some will fail but in

question. Of course, each situation will As a consequence, experts try to bid the long run, the aggressive approach

have its own set of circumstances upon all marginal vulnerable games, should turn out to be a winner, even if

which any decision will depend. However, choosing to play in part-scores only only 40% of such contracts succeed.

when playing teams, adopting an when game contracts appear to be

optimistic approach to the bidding of completely unrealistic propositions.

game contracts is likely to be a successful In passing, it is probably sensible to

strategy. It is a matter of risk and reward. note that the strategy of optimistic

For example, imagine that you are North, When non-vulnerable, the risk-reward ratio bidding should not be applied to

with the hand below: is closer but, even so, a mildly aggressive slam-bidding, for which a cautious

On this occasion, bidding game turned

´ QJ852 and, with everybody out to be a successful choice:

® 65 Game All. Dealer East. When playing a teams match, having to

´ QJ852 play against a pair that seems to be in

3 Showing four-card spade support and a ´ A 10 6 4 Therefore, the idea should be to exert

t KQ4 of pressure on your opponents when the

What now? ® AQ9 opportunity arises – stay out of hopeless

Playing in a duplicate pairs event, it is games but be prepared to bid all the close

sensible to take no further action. The ones.

point is that both 3NT and 4´ rate to fail When West led the ®J (partner's suit) In the first article of the series, I

reasonably often and going down is likely against 4´, a third-round club ruff pro- advocated the habit of playing safely for

to be just as bad as making game would be vided access to the dummy and despite the contract. So now, the two major

good. However, when this deal occurred in the tA being offside, the ´K, ™J and ®K ingredients of successful teams play have

a top international teams event, the were all successfully finessed (dummy's been covered – bold bidding in the game

players were contemplating which game to trumps serving as subsequent entries) to zone, followed by careful play to secure the

bid, rather than whether to bid one. enable the contract to be made. On other (potentially precarious) contract.

The reason for this is that 4´ making leads, the play is more complicated but

one. On the other hand, 4´ minus one monds (or a heart to the king) and forcing

loses 6 IMPS by comparison with 3´ the opponents to broach the critical suits. A friend of mine once told the tale of a

making. The reward for bidding game is a Meanwhile, 3NT was made when West fellow bridge player who ‘gets a nose-bleed

gain of 10 IMPs, the risk is a loss of 6 decided to lead a diamond (the ®J lead when the bidding reaches the three-level.’

IMPs. Naturally, the prospect of over- would have defeated the contract) and the ‘No good at teams!’ he added . . . r

bidding slightly and then being doubled diamonds were blocked. The successful

When you have finished

another factor: that, occasionally, the but this is a situation where good players

defenders will give tricks away, especially earn their own luck.

with the opening lead. So be prepared to bid marginal games.