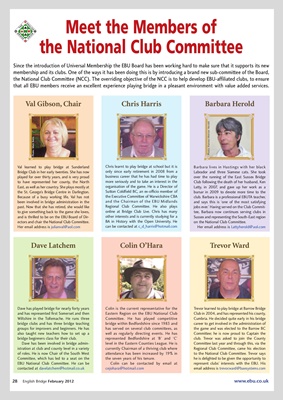 Meet the Members of

membership and its clubs. One of the ways it has been doing this is by introducing a brand new sub-committee of the Board,

the National Club Committee (NCC). The overriding objective of the NCC is to help develop EBU-affiliated clubs, to ensure

that all EBU members receive an excellent experience playing bridge in a pleasant environment with value added services.

Bridge Club in her early twenties. She has now only since early retirement in 2008 from a Labrador and three Siamese cats. She took

played for over thirty years, and is very proud business career that he has had time to play over the running of the East Sussex Bridge

to have represented her county, the North more seriously and to take an interest in the Club following the death of her husband, Ken

East, as well as her country. She plays mostly at organisation of the game. He is a Director of ,

the St. George’s Bridge Centre in Darlington. Sutton Coldfield BC, an ex-officio member of bursar in 2009 to devote more time to the

Because of a busy working life, Val has not the Executive Committee of Warwickshire CBA club. Barbara is a professional EBUTA teacher,

past. Now that she has retired, she would like Regional Club Committee. He also plays jobs ever.’ Having served on the Club Commit-

to give something back to the game she loves, online at Bridge Club Live. Chris has many tee, Barbara now continues serving clubs in

Wiltshire in the Tollemache. He runs three Committee. He has played competitive Cumbria. He decided quite early in his bridge

groups for improvers and beginners. He has has served on several club committees, as the game and was elected to the Barrow BC

also taught new teachers how to set up a well as regularly directing events. He has Committee; he is now proud to Captain the

bridge beginners class for their club. represented Bedfordshire at ‘B’ and ‘C’ club. Trevor was asked to join the County

Dave has been involved in bridge admin- level in the Eastern Counties League. He is Committee last year and through this, via the

istration at club and county level in a variety currently Chairman of a thriving club where Regional Club Committee, came his election

of roles. He is now Chair of the South West attendance has been increased by 19% in to the National Club Committee. Trevor says

Committee, which has led to a seat on the the seven years of his tenure. he is delighted to be given the opportunity to

EBU National Club Committee. He can be Colin can be contacted by email at represent clubs’ interests with the EBU. His