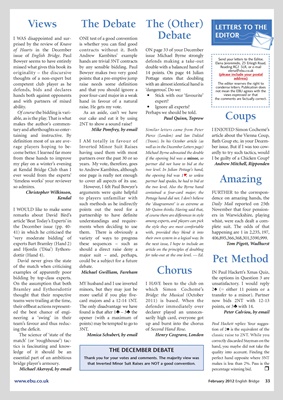 Views The Debate The (Other) LETTERS TO THE

of Hearts in the December contracts without it. Both ON page 33 of your December

missed what gives this book its by any sensible bidding. Paul double with a balanced hand of Reading RG1 5LR, or e-mail

thoughts of a non-expert but points: that a pre-emptive jump Pottage states that doubling address)

defends, bids and declares and that you should ignore a ‘dangerous’. Do we: not mean the EBU agrees with the

the comments are factually correct.

and with partners of mixed hand in favour of a natural expert?

ability. raise. He gets my vote. • Ignore all experts?

Of course the bidding is vari- As an aside, can’t we have Perhaps we should be told.

able, as is the play. That is what our cake and eat it by using Paul Quinn, Toprow Coups

makes the author’s commen- 2NT to show a sound raise?

taining and instructive. By Pierce (London) and Ian Dalziel article about the Vienna Coup,

definition most of us are ave - I AM total ly in favour of (Troon). In his October article (as Bath Coup etc. in your Decem-

rage players hoping to be- Inverted Minor Suit Raises well as in the December Letters page) ber issue. But if I was too cow-

come better. I learned far more having used them with most Michael Byrne advocated the double ardly to try such tactics, would

from these hands to improve partners over the past 30 or so if the opening bid was a minor, so I be guilty of a Chicken Coup?

my play on a winter’s evening years. My vote, therefore, goes partner did not have to bid at the Andrew Mitchell, Ripponden

at Kendal Bridge Club than I to Andrew Kambites, although two level. In Julian Pottage’s hand,

ever would from the experts’ one page is really not enough the opening bid was 1™, so unless

‘timeless works’ your reviewer to cover all aspects of its use. partner had spades, he had to bid at Amazing

so admires. However, I felt Paul Bowyer’s the two level. Also the Byrne hand

Christopher Wilkinson, arguments were quite helpful contained a four-card major; the FURTHER to the correspon-

Kendal to players unfamiliar with Pottage hand did not. I don’t believe dence on amazing hands, the

I WOULD like to make some points out the need for a Mr Quinn thinks. Having said that, November that four pension-

remarks about David Bird’s partnership to have definite of course there are differences in style ers in Warwickshire, playing

article ‘Beat Today’s Experts’ in understandings and require- among experts, and players can pick whist, were each dealt a com-

the December issue (pp. 40- ments when deciding to use the style they are most comfortable plete suit. The odds of that

experts Bart Bramley (Hand 2) these sequences – such as the next issue, I hope to include an Tom Pigott, Wadhurst

of the match when criticising debate.

bidding by top-class experts. the options in Question 3 are

On the assumption that both MY husband and I use inverted I HAVE been to the club on unsatisfactory. I would reply

Bramley and Eythors dottir minors, but they may just be which Simon Cochemé’s 2´ (= either 11 points or a

thought that their respective more useful if you play five- Bridge: the Musical (October transfer to a minor). Partner

their offbeat actions represent- The only disadvantage we have defender immediately over points, or 3® with 14.

ed the best chance of engi- found is that after 1® – 3® the declarer played an unneces- Peter Calviou, by email

neering a ‘swing’ in their opener (with a maximum of sarily high card, everyone got

team’s favour and thus reduc- points) may be tempted to go to up and burst into the chorus Paul Hackett replies: Your sugges-

ing the deficit. 3NT. of Second Hand Rose. tion of 2´ is the equivalent of the

The science of ‘state of the Monica Schubert, by email Henry Cosgrave, London classic raise to 2NT. While you

match’ (or ‘roughhouse’) tac- correctly discarded Stayman on the

tics is fascinating and know- hand, you maybe did not take the

ledge of it should be an THE DECEMBER DEBATE quality into account. Finding the

essential part of an ambitious Thank you for your votes and comments. The majority view was perfect hand opposite where 3NT

bridge player’s armoury. that Inverted Minor Suit Raises are NOT a good convention. makes is less than 2%. Pass is the