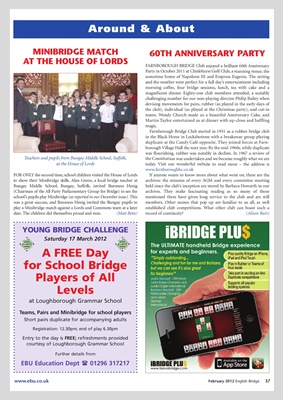 Party in October 2011 at Chislehurst Golf Club, a stunning venue, the

sometime home of Napoleon III and Empress Eugenie. The setting

challenging number for our non-playing director Philip Bailey when

devising movements for pairs, rubber (as played in the early days of

the club), individual (as played at the Christmas party), and cut-in

teams. Wendy Church made us a beautiful Anniversary Cake, and

Martin Taylor entertained us at dinner with up-close and baffling

Farnborough Bridge Club started in 1951 as a rubber bridge club

in the Black Horse in Locksbottom with a breakaway group playing

duplicate at the Candy Café opposite. They joined forces at Farn-

borough Village Hall the next year. By the mid-1960s, while duplicate

was flourishing, rubber was notably in decline. In 1967 a review of

Teachers and pupils from Bungay Middle School, Suffolk, the Constitution was undertaken and we became roughly what we are

at the House of Lords today. Visit our wonderful website to read more – the address is

FOR ONLY the second time, school children visited the House of Lords If anyone wants to know more about what went on, there are the

to show their Minibridge skills. Alan Green, a local bridge teacher at archives: the minutes of every AGM and every committee meeting

Bungay Middle School, Bungay, Suffolk, invited Baroness Henig held since the club’s inception are stored by Barbara Howarth in our

(Chairman of the All Party Parliamentary Group for Bridge) to see the archives. They make fascinating reading as so many of those

school’s pupils play Minibridge (as reported in our December issue). This mentioned there have given long service to the club and are still

was a great success, and Baroness Henig invited the Bungay pupils to members. Other names that pop up are familiar to us all, as well

play a Minibridge match against a Lords and Commons team at a later established club competitions. What other club can boast such a

date. The children did themselves proud and won. (Matt Betts) record of continuity? (Alison Burt)

Entry to the day is FREE; refreshments provided