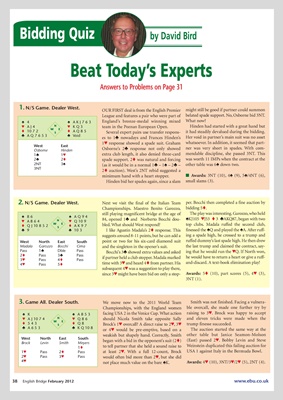 1. N/S Game. Dealer West. OUR FIRST deal is from the English Premier might still be good if partner could summon

League and features a pair who were part of belated spade support. No, Osborne bid 3NT.

™ AJ4 N ™ KQ3 team in the Poznan European Open. Hinden had started with a great hand but

es to 1® nowadays and Frances Hinden’s

1™ response showed a spade suit. Graham whatsoever. In addition, it seemed that part-

Osborne Hinden Osborne’s 2® response not only showed ner was very short in spades. With com-

2® 2t spade support. 2t was natural and forcing was worth 11 IMPs when the contract at the

Hinden bid her spades again, since a slam small slams (3).

2. N/S Game. Dealer West. Next we visit the final of the Italian Team per. Bocchi then completed a fine auction by

still playing magnificent bridge at the age of The play was interesting. Garozzo, who held

suggests around 8-11 points, but he can add a ing a spade high, he crossed to a trump and

Madala Garozzo Bocchi Cima and the singleton in the opener’s suit. the last trump and claimed the contract, say-

Pass 1® Dble Pass Bocchi’s 3® showed extra values and asked ing that he would run the ™Q. If North won,

if partner held a club stopper. Madala marked he would have to return a heart or give a ruff-

4™ Pass 5t time with 3™ and heard 4t from partner. His and-discard. A text-book elimination play!

subsequent 4™ was a suggestion to play there,

3. Game All. Dealer South. We move now to the 2011 World Team Smith was not finished. Facing a vulnera-

Championships, with the England women ble overcall, she made one further try by

or 4™ would be pre-emptive, based on a

began with a bid in the opponent’s suit (2t) (East) passed 2™. Bobby Levin and Steve