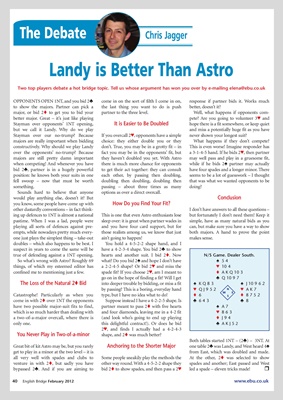 Landy is Better Than Astro

Two top players debate a hot bridge topic. Tell us whose argument has won you over by e-mailing elena@ebu.co.uk

OPPONENTS OPEN 1NT, and you bid 2® come in on the sort of filth I come in on, response if partner bids it. Works much

to show the majors. Partner can pick a the last thing you want to do is push better, doesn’t it?

major, or bid 2t to get you to bid your partner to the three level. Well, what happens if opponents com-

better major. Great – it’s just like playing pete? Are you going to volunteer 3™ and

Stayman over opponents’ 1NT opening, It is Easier to Be Doubled hope there is a fit somewhere, or keep quiet

but we call it Landy. Why do we play and miss a potentially huge fit as you have

Stayman over our no-trump? Because If you overcall 2™, opponents have a simple never shown your longest suit?

majors are really important when bidding choice: they either double you or they What happens if they don’t compete?

constructively. Why should we play Landy don’t. True, you may be in a grotty fit – in This is even worse! Imagine responder has

majors are still pretty damn important they haven’t doubled you yet. With Astro may well pass and play in a gruesome fit,

when competing! And whenever you have there is much more chance for opponents while if he bids 2´ partner may actually

bid 2®, partner is in a hugely powerful to get their act together: they can consult have four spades and a longer minor. There

position: he knows both your suits in one each other, by passing then doubling, seems to be a lot of guesswork – I thought

something. passing – about three times as many doing?

Sounds hard to believe that anyone options as over a direct overcall.

would play anything else, doesn’t it? But Conclusion

you know, some people have come up with How Do you Find Your Fit?

ing up defences to 1NT is almost a national This is one that even Astro enthusiasts lose but fortunately I don’t need them! Keep it

pastime. When I was a lad, people were sleep over: it is great when partner wades in simple, have as many natural bids as you

playing all sorts of defences against pre- and you have four card support, but for can, but make sure you have a way to show

empts, while nowadays pretty much every- those realists among us, we know that just both majors. A hand to prove the point

true of defending against a 1NT opening. hearts and another suit. I bid 2t. Now N/S Game. Dealer South.

Catastrophe! Particularly as when you type, but I have no idea what to do! t 6 S t 8752

have two possible major-suit fits to find, partner meant to pass 2t with five hearts ´ A7

which is so much harder than dealing with and four diamonds, leaving me in a 4-2 fit ™ 863

a two-of-a-major overcall, where there is (and look who’s going to end up playing t J94

only one. this delightful contract!). Or does he bid ® AKJ52

You Never Play in Two-of-a-minor shape, and 2t was much better?

Great bit of kit Astro may be, but you rarely Anchoring to the Shorter Major one table 2® was Landy, and West heard 4´

get to play in a minor at the two level – it is from East, which was doubled and made.

all very well with spades and clubs to Some people sneakily play the methods the At the other, 2t was selected to show

venture in with 2t, but sadly you have other way round. With a 4-5-2-2 shape they spades and another; East passed and West

bypassed 2®. And if you are aiming to bid 2t to show spades, and then pass a 2™ led a spade – eleven tricks made! r