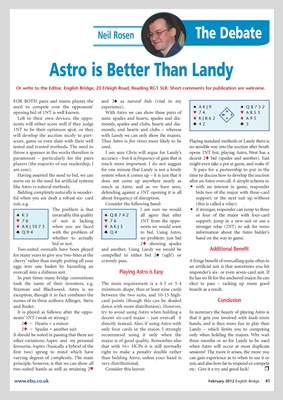 Astro is Better Than Landy

opening bid of 1NT is well known. With Astro we can show these pairs of ™ 74 W E

Left to their own devices, the oppo- suits: spades and hearts, spades and dia- t KJ862 S t A95

nents will either score well if they judge monds, spades and clubs, hearts and dia- ® 42 ® 3

1NT to be their optimum spot, or they monds, and hearts and clubs – whereas

will develop the auction nicely to part- with Landy we can only show the majors.

score, game or even slam with their well Thus Astro is five times more likely to be Playing standard methods or Landy there is

tested and trusted methods. The need to used. no sensible way into the auction after South

throw a spanner in the works therefore is I am sure Chris will argue for Landy’s opens 1NT but, playing Astro, West has a

paramount – particularly for the pairs accuracy – but it is frequency of gain that is decent 2t bid (spades and another). East

players (the majority of our readership, I much more important. I do not suggest might even take a pot at game, and make it!

am sure). for one minute that Landy is not a lovely It pays for a partnership to put in the

Having asserted the need to bid, we can system when it comes up – it is just that it time to discuss how to develop the auction

move on to the need for artificial systems does not come up anywhere nearly as after an Astro overcall. A simple scheme is:

like Astro vs natural methods. much as Astro, and as we have seen, • with no interest in game, responder

ful when you are dealt a robust six- card about frequency of disruption. support, or the next suit up without

suit, e.g. Consider the following hand: (this is called a relay);

The problem is that I am sure we would • if stronger, responder can jump to three

® Q94 with the problem of ® Q4 to bid. Using Astro, information about the Astro bidder’s

whether to actually no problem: just bid hand on the way to game.

bid or not. 2t showing spades

Two-suited overcalls have been played and another. Using Landy we would be Additional Benefit

for many years to give you ‘two-bites at the compelled to either bid 2´ (ugh!) or

cherry’ rather than simply putting all your cravenly pass. A fringe benefit of overcalling quite often in

overcall into a dubious suit. Playing Astro is Easy responder’s six- or even seven-card suit. If

In past times many bridge conventions he has no fit for the anchored major, he can

took the name of their inventors, e.g. The main requirement is a 4-5 or 5-4 elect to pass – racking up many good

Stayman and Blackwood. Astro is no minimum shape, thus at least nine cards boards as a result.

exception, though it in fact combines the between the two suits, and 10-15 high-

names of its three authors: Allinger, Stern card points (though this can be shaded Conclusion

and Rosler. down with more distribution). However,

It is played as follows; after the oppo- try to avoid using Astro when holding a In summary the beauty of playing Astro is

nents’ 1NT (weak or strong): decent six-card major – just overcall it that it gets you involved with loads more

2® = Hearts + a minor directly instead. Also, if using Astro with hands, and is thus more fun to play than

2t = Spades + another suit only four cards in the major, I strongly Landy – which limits you to competing

It should be noted in passing that there are recommend using it only when the only when holding the majors. Why wait

other variations; Aspro and my personal major is of good quality. Remember also three months or so for Landy to be used

favourite, Asptro (basically a hybrid of the that with 16+ HCPs it is still normally when Astro will occur at most duplicate

first two) spring to mind which have right to make a penalty double rather sessions? The more it arises, the more you

varying degrees of complexity. The main than bidding Astro, unless your hand is can gain experience as to when to use it or

principle, however, is that we can show all very distributional. not, and also how far to respond or compete

two-suited hands as well as retaining 2™ Consider this layout: etc. Give it a try and good luck! r