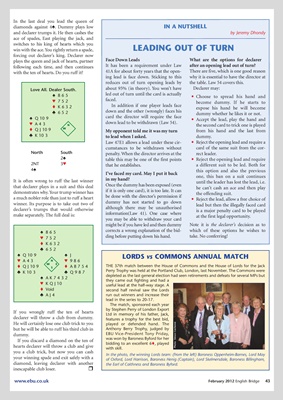 In the last deal you lead the queen of

diamonds against 4´. Dummy plays low IN A NUTSHELL

and declarer trumps it. He then cashes the by Jeremy Dhondy

ace of spades, East playing the jack, and

switches to his king of hearts which you

win with the ace. You rightly return a spade, LEADING OUT OF TURN

plays the queen and jack of hearts, partner Face Down Leads What are the options for declarer

following each time, and then continues It has been a requirement under Law after an opening lead out of turn?

with the ten of hearts. Do you ruff it? 41A for about forty years that the open- There are five, which is one good reason

ing lead is face down. Sticking to this why it is essential to have the director at

reduces out of turn opening leads by the table. Law 54 covers this.

Love All. Dealer South. about 95% (in theory). You won’t have Declarer may:

led out of turn until the card is actually

become dummy. If he starts to

t K632 In addition if one player leads face

expose his hand he will become

dummy whether he likes it or not.

card the director will require the face

N the second card to trick one is played

North South penalty. When the director arrives at the rect leader.

that he establishes. a different suit to be led. Both for

4´ this option and also the previous

I’ve faced my card. May I put it back

one, this ban on a suit continues

It is often wrong to ruff the last winner in my hand?

until the leader has lost the lead, i.e.

he can’t cash an ace and then play

demonstrates why. Your trump winner has if it is only one card), it is too late. It can

be done with the director’s permission if

a much nobler role than just to ruff a heart

winner. Its purpose is to take out two of dummy has not started to go down • Reject the lead, allow a free choice of

lead but then the illegally faced card

declarer’s trumps that would otherwise although there may be unauthorised

is a major penalty card to be played

make separately. The full deal is: information(Law 41). One case where

at the first legal opportunity.

you may be able to withdraw your card

™ 752 ding before putting down his hand. take. No conferring!

they came out fighting and had a

® AJ4 run out winners and increase their

The match, sponsored each year

by Stephen Perry of London Export

If you wrongly ruff the ten of hearts Ltd in memory of his father, Jack,

declarer will throw a club from dummy. features a trophy for the best bid,

He will certainly lose one club trick to you

played or defended hand. The

but he will be able to ruff his third club in Anthony Berry Trophy, judged by

was won by Baroness Byford for her

If you discard a diamond on the ten of

bidding to an excellent 6t, played

hearts declarer will throw a club and give with skill.

you a club trick, but now you can cash

In the photo, the winning Lords team: (from the left) Baroness Oppenheim-Barnes, Lord May

diamond, leaving declarer with another the Earl of Caithness and Baroness Byford.