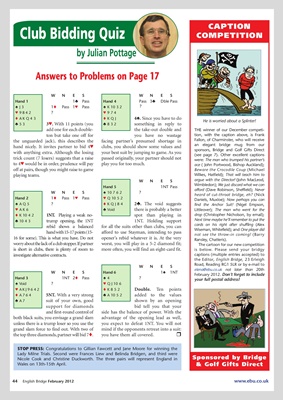 Answers to Problems on Page 17

He is worried about a Splinter!

ton but take one off for you have no wastage tion, with the caption above, is Frank

the unguarded jack), this describes the facing partner’s presumed shortage in Fallon, of Charminster, who will receive

hand nicely. It invites partner to bid 4™ clubs, you should show some values and an elegant bridge mug from our

with anything extra. Although the losing your best suit by jumping to game. As you (see page 7). Other excellent captions

trick count (7 losers) suggests that a raise passed originally, your partner should not were: The man who trumped his partner’s

to 4™ would be in order, prudence will pay play you for too much. ace ( John Portwood, Bishop Auckland);

off at pairs, though you might raise to game Beware the Crocodile Coup (Michael

playing teams. Wilkes, Hatfield); That will teach him to

Hand 5 1NT Pass Wimbledon); We just discard what we can

™AK6 ® Void there is probably a better Littleover); The man who went for the

rebid shows a balanced for all the suits other than clubs, you can cards on his right after shuffling (Alex

Wiseman, Whitefield); and One player did

hand with 15-17 points (15- afford to use Stayman, intending to pass not see the throw-in coming! (Barry

16 for some). This is what you have. Do not opener’s rebid whatever it is. At the very Ransley, Chatteris).

worry about the lack of a club stopper. If partner worst, you will play in a 5-2 diamond fit; The cartoon for our new competition

is short in clubs, there is plenty of room to more often, you will find an eight-card fit. is below. Please send your bridgy

February 2012. Don’t forget to include

®A7 suit of your own, good shown by an opening

support for diamonds bid tell you that your

and first-round control of side has the balance of power. With the

both black suits, you envisage a grand slam advantage of the opening lead as well,

unless there is a trump loser so you use the you expect to defeat 1NT. You will not

grand slam force to find out. With two of mind if the opponents retreat into a suit:

the top three diamonds, partner will bid 7t. you have them all covered. r

STOP PRESS: Congratulations to Gillian Fawcett and Jane Moore for winning the

Lady Milne Trials. Second were Frances Liew and Belinda Bridgen, and third were

Nicole Cook and Christine Duckworth. The three pairs will represent England in Sponsored by Bridge