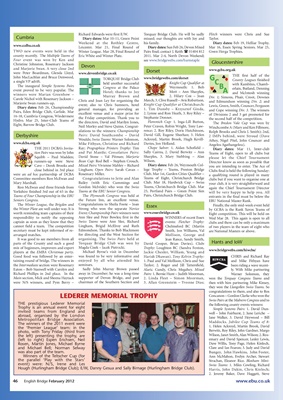 Richard Edwards were first E/W. Torquay Bridge Club. He will be sadly Flitch winners were Chris and Sue

Four event was won by Ken and see www.bridgewebs.com/barnstaple

John MacLachlan and Bruce Denwood, THE first half of the

event proved to be very popular. The Hotel; thanks to Joy Mott – Ann Sharples,

excellent venue and a major prize for 2. Lynne and Ron Heath, 3. Roy Riley – of Divisions 2 and 3 get promoted for

Hydro. Mar 25, Inter-Club Teams of the second half of the competition.

were an ad hoc partnership of DCBA Rosemary Miller. Club. Mar 1st, Garden Cities Qualifier – a qualifying round is played in many

Committee members Ron McEwan and Congratulations to Jette and Alan Teams of Eight, Christchurch Bridge clubs but if you want to organise one at

Mary Marshall. Bailey (with Eric Cummings and Club. Mar 18, Hardwick Cup – Swiss your club, it is very straightforward and

Yorkshire finished 3rd out of 65 in the Teams at the EBU Senior Congress. 25, Portland Pairs – Green Point Sim will be very happy to help you. All

Teams of Four Championship in the EBU The Plymouth Congress was held at Pairs, Christchurch Bridge Club. entrants in the final must be below the

The Winter League, the Brigden and Congratulations to Sheila Foote – Joan Finally, the only mid-week event held

the Winter Plate are well under way. It is Strong who won the separate Novice

by GCBA is the Rank Xerox Teams of

worth reminding team captains of their Event; Championship Pairs winners were www.essexbridge.co.uk Eight competition. This will be held on

responsibility to notify the opposing Ann Slee and Peter Bowles; first in the WINNERS of recent Essex Wed Mar 28. This again is open to all

captain as soon as they know that they Swiss Teams were Ann Slee, Richard events: Fletcher Trophy: clubs and there can be only a maximum

cannot field a team. The competition Lingham, Brigid McElroy and Ruth Chelmsford BC (Martin of two players in the team of eight who

secretary must be kept informed of re- Edmondson. Thanks to Bob Blackmore Smith, Jon Williams, Val are National Masters or above.

arranged matches. for directing and the West Section for Mollison, George and

It was good to see members from all organising. The Swiss Pairs held at Jean Rance, Sandy Smith,

parts of the County and such a good Torquay Bridge Club was won by David Cooper, Brian Davies). Clubs Hants and IoW

Good food was followed by an enter- was found to be very informative and Harish Dhawan). Tony Kelvin Trophy: CHRIS and Richard Ray

taining round of bridge. The winners in enjoyed by all who attended his 1. Paul and Val Mollison, Chris and Sue and Mike Fithyan have

the Intermediate section were Rosemary seminars. Taylor; 2. Roger and Jill Tattersfield, been riding a wave recent-

Richard Phillips in 2nd place. In the away in December; he was a long-time Pairs: 1. Bernie Hunt – Judith Moorman, Warner Solomon, they

were N/S winners, and Pym Berry – chairman of the Southern Section and 3. Allan Greenstein – Yvonne Dias; then with him partnering Mike Kinsey,

they won the Llangollen Swiss Teams. So

congratulations to them, and also to Ros

Swiss Pairs at the Malvern Congress and to

The winners of the 2011 event were