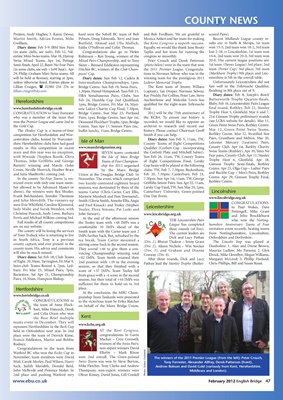 Preston, Andy Hughes; 3. Karen Dewar, hard were the Sobell BC team of Bob and Bob Fordham. We are grateful to scored Pairs).

(in some clubs, see web). Feb 12, Val- Congratulations also go to Helen Taplin and her team for running the lost 2-18; vs Lincolnshire, 1st team won

29, Philip Graham Mini-Swiss teams. All pions’ Cup. tions to Norman Selway who was in the (Markham Trophy) 9th place; and Leic-

will be held at Romsey, starting at 2pm, Diary dates: Sun Feb 12, Cadets & winning team for the prestigious 2011 estershire is 5th in the overall table.

CONGRATULATION to Tony Forrester Bridge Centre. Sun Mar 25, Portland 2012 will be the 75th anniversary of Trophy Heat 5, Glenfield. Mar 6 and 7,

who was a member of the team that Pairs, 1pm, Bridge Centre. Sun Apr 1st, the KCBA. To ensure our history is 21st Gimson Trophy preliminary rounds

won the Premier League and came 2nd in Desmond Flockhart Trophy, 1pm, Bridge recorded, we would like to appoint an (see LCBA website for details). Mar 11,

competition for Herefordshire and Wor- Smith if you can help. Rothley Centre. Mar 12, Stratified Sim

shire. Herefordshire clubs have had good

years and this year was no exception, SEVEN teams contested the Corbett Plate and Mitchell Salver). Swiss Teams (Rothley). Apr 10, Yates No

Barrett) winning and Marcle (John ship for 2011 organised Cup heats will be played at the following Gimson Trophy Semi-finals, Rothley

ber allowed to be Advanced Master or sessions, was dominated by three of the Larsky Cup Final, TW. Sun May 20, 1pm,

and Fred Kissack) and Tooley (Stephen

Ferris and Michael Wilkins coming 3rd. At the end of the afternoon session

THE Leicestershire Pairs who won the Notting-

are on our website. comfortable 10 IMPs ahead of the three rounds (of five). invitation event recently, beating teams

The county will be losing the services Smith team with the Carter team just 2 The current leaders are from Nottinghamshire, Lincolnshire,

of Tony Truluck who is returning to live IMPs further back. But, refreshed by the Dick and Lucy Pathan Oxfordshire and Derbyshire.

county captain, and ever present in the stirring come-back in the second session. (Div. 2), Alison Nichols – Win Stocker Dunholme: 1. Alan and Drene Brown,

county team. His advice and comments They scored +46 to give them a con- (Div. 3), and Graham and Dianne Maurice Ladlow, Mo Parsons; 2. Glyn

Inter-club Teams Round 4, 7pm, Led- session, so that they finished with a

Bartestree. Sat Apr 21, Championship from grace with a -4 score in the second

sufficient for them to hold on to 3rd

At the conclusion, the MBU Cham-

CONGRATULATIONS to to the victorious team by Erika Slatcher

the team of Anne Flock- on behalf of the Manx Bridge Union.

and Celia Oram who won

teams event in December. They will

represent Hertfordshire in the Beck Cup

held in Oxfordshire next year. In 2nd AT the Kent Congress,

place were the team of Derrick Kime, congratulations to Gavin

Rodney. winners of the Swiss Pairs;

Congratulations to the team from non-expert winners David

Watford BC who won the Eccles Cup in Ellerby – Mark Rixon

November; team members were David were 2nd overall. The Green-pointed The winners of the 2011 Premier League (from the left): Peter Crouch,

John McBryde and Florence Stoker. In Thompson; non-expert winners were Middlesex and London).