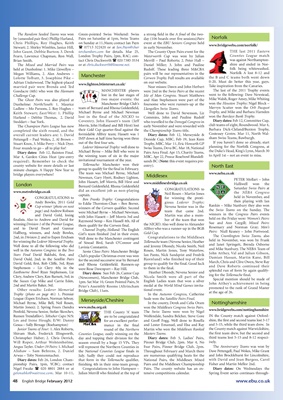 The Random Seeded Teams was won Green-pointed Swiss Weekend: Swiss a strong field in the A final of the two-

The Mixed and Married Pairs was or at chris.duckworth@lineone.net. Daniel Miller; 3. John and Pauline shire and ended in Nor-

Megan Williams, 2. Alan Andrews – pairs will be our representatives in the Norfolk A lost 8-12 and

Manchester Corwen Trophy. Full results are available the B and C teams both went down

Adrian Underwood. The highest-placed on our website. 0-20. Must do better this year, guys.

www.lighton.btinternet.co.uk/ Take inspiration from the Canaries.

married pair were Brenda and Ted Near misses: Dawn and John Herbert

Challenge Cup. lost in the last stages of Isle of Man Congress. Stuart Matthews went to the following: Dave Newstead,

The Ghost Pairs was also played at two major events: the and Alan Stephenson were part of the Mike Walsh, Roger Amey, Mike Whiting

Harland – Debbie Thomas, 2. David lost in the final of the NICKO to Commins, John and Pauline Rudolf won the Barclays Bank Trophy.

completed the sixth round, and the their Gold Cup quarter-final against the the Championship Teams title. Barbara Dick-Cleland/Buxton Trophy,

Four rounds to go – all to play for! Lederer Memorial Trophy: well done to Swiss Teams, Deva BC. Mar 18, National planning for the Norfolk Congress, at

Mar 4, Garden Cities Heat (pre-entry the winning team of six in the major MBC. Apr 22, Preece Rosebowl Blundell- to April 1st – not an event to miss.

required). Remember to check the invitational tournament of the year. sands BC (Note: this event requires pre-

minute changes. A Happy New Year to group to qualify for the final in February.

CONGRATULATIONS to Saturday Swiss Pairs at

www.metrobridge.co.uk did an excellent job as non-playing

captain. held in November, and

CONGRATULATIONS to Ben Franks Trophy: Congratulations for winning the presti-

Cup winner (photo on next winners of the Corwen qualifier. Second Nevena Senior was in the

page) and Andrew Robson team that came 2nd. the Swiss Teams on the Sunday. The

and David Gold, losing with John Hassett – Jeff Morris 3rd and Martin was also a mem-

finalists. Also to Andrew and David for ber of the team that won held on the Friday were: Women’s Pairs:

winning Division 1 of the Premier League, them qualify for the Corwen final. the NICKO. Also well done to Alexander

and to David Ewart and Gunnar Allfrey who was a runner-up in the BGB Rosemary and Norman Gray; Men’s

2nd, in Division 2; and to Espen Erichsen Congratulations to the Middlesex The Cramlington Swiss Teams, also

Well done to the Manchester contingent held in November, was won by Frank

Well done to all the following who did and Jeremy Dhondy, Nicola Smith, Neil and Janet Springett, Brenda Osborne

Lavinia Constantin. and Mike Stanbury. The NEBA Team of

David Ould, 2nd; in the Satellite Pairs for the second successive year by Bernard Bjornlund) who finished top of their

and Rhona Goldenfield. Runners-up and Dave Roberts continued their

Stephenson – Liz Clery 4th; in the were Rose Davenport – Ray Hill. to them in the final.

the Sussex Cup Mike and Carrie Eden, Special mention should be made of

2nd and Martin Baker, 3rd. John Atthey’s achievement in being

promoted to the rank of Grand Master

Trophy (photo on page 46): 1. Premier In the Autumn Congress, Catherine

THE County ‘A’ team The Swiss Teams were won by Nigel

Rumen Trendafilov). Teltscher Cups: N/S: are to be congratulated Wolfendale, Sandra Belcher, Steve Gore IN the County match against Oxford-

Gesua – Sally Birnage (Roehampton) mance in the final and Lester Emanuel, and Elsa and Ray and 5-15, while the third team drew. In

Junior Teams of Four: 1. Alex Roberts, round of the Northern Martin who won the Middlesex Ranked the County match against Warwickshire,

Shivam Shah, Frederick Illingworth, Counties League, easily winning on the Masters Teams. the first team drew, but the second and

Angus Tayler. Under-19 Pairs: 1. Michael will represent the Northern Counties in Fear Pairs, Pinner Bridge Club, 2pm. The Anniversary Teams was won by

Arwas – Toby Nonnenmacher. July. Sadly they could not reproduce are numerous qualifying heats for the and John Brocklehurst for Lincolnshire,

Nigel Freake ( 020 8801 2884 or at Congratulations to John Hampson – Pairs. The county website has an ex- Diary dates: On Wednesdays the