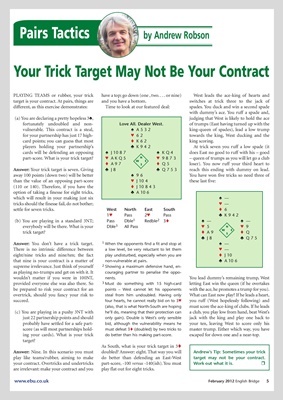 Your Trick Target May Not Be Your Contract

PLAYING TEAMS or rubber, your trick have a top; go down (one , two. . . . or nine) West leads the ace-king of hearts and

target is your contract. At pairs, things are and you have a bottom. switches at trick three to the jack of

different, as this exercise demonstrates: Time to look at our featured deal: spades. You duck and win a second spade

with dummy’s ace. You ruff a spade and,

(a) You are declaring a pretty hopeless 3´, judging that West is likely to hold the ace

fortunately undoubled and non- Love All. Dealer West. of trumps (East having turned up with the

vulnerable. This contract is a steal, ´ A532 king-queen of spades), lead a low trump

for your partnership has just 17 high- ™ 62 towards the king, West ducking and the

card points; you can guess that most t K62 king scoring.

Answer: Your trick target is seven. Giving ® J8 ® Q753 reach this ending with dummy on lead.

than the value of an opposing part-score ™ J 10 4 these last five:

which will result in your making just six ´ —

tricks should the finesse fail, do not bother; ™ —

Answer: You don’t have a trick target. 1 When the opponents find a fit and stop at ´ —

There is no intrinsic difference between a low level, be very reluctant to let them ™ —

eight/nine tricks and nine/ten; the fact play undisturbed, especially when you are t J 10

that nine is your contract is a matter of non-vulnerable at pairs. ® A 10 6

as playing no-trumps and get on with it. It couraging partner to penalise the oppo-

wouldn’t matter if you were in 100NT, nents. You lead dummy’s remaining trump, West

provided everyone else was also there. So 3 Must do something with 15 high-card letting East win the queen (if he overtakes

be prepared to risk your contract for an points – West cannot let his opponents with the ace, he promotes a trump for you).

overtrick, should you fancy your risk to steal from him undoubled. Having only What can East now play? If he leads a heart,

succeed. four hearts, he cannot really bid on to 3™ you ruff (West hopelessly following) and

(also, that is what North-South are hoping must score the ace-king of clubs. If he leads

(c) You are playing in a pushy 3NT with he’ll do, meaning that their protection can a club, you play low from hand, beat West’s

just 22 partnership points and should only gain). Double is West’s only sensible jack with the king and play one back to

probably have settled for a safe part- bid, although the vulnerability means he your ten, leaving West to score only his

score (as will most partnerships hold- must defeat 3t (doubled) by two tricks to master trump. Either which way, you have

ing your cards). What is your trick do better than his making part-score. escaped for down one and a near-top.

As South, what is your trick target in 3t

Answer: Nine. In this scenario you must doubled? Answer: eight. That way you will Andrew’s Tip: Sometimes your trick

play like teams/rubber, aiming to make do better than defending an East-West target may not be your contract.

your contract. Overtricks and undertricks part-score, -100 versus -140(ish). You must Work out what it is. r

are irrelevant: make your contract and you play flat out for eight tricks.