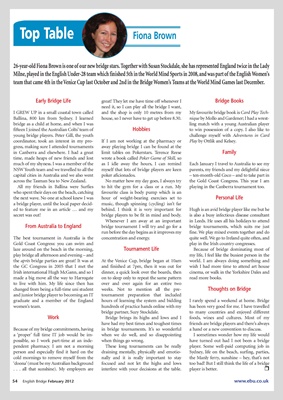 26-year-old Fiona Brown is one of our new bridge stars. Together with Susan Stockdale, she has represented England twice in the Lady

Milne, played in the English Under-28 team which finished 5th in the World Mind Sports in 2008, and was part of the English Women’s

team that came 4th in the Venice Cup last October and 2nd in the Bridge Women’s Teams at the World Mind Games last December.

Early Bridge Life great! They let me have time off whenever I Bridge Books

need it, so I can play all the bridge I want,

Ballina, 800 km from Sydney. I learned house, so I never have to get up before 8.30. nique by Mollo and Gardener; I had a wrest-

bridge as a child at home, and when I was ling match with a young Australian player

fifteen I joined the Australian Colts’ team of Hobbies to win possession of a copy. I also like to

young bridge players. Peter Gill, the youth challenge myself with Adventures in Card

coordinator, took an interest in my pro- If I am not working at the pharmacy or Play by Ottlik and Kelsey.

gress, making sure I attended tournaments away playing bridge I can be found at the

in Canberra and elsewhere. I had a great limit tables on Pokerstars. Terence Reese Family

time, made heaps of new friends and lost wrote a book called Poker Game of Skill, so

much of my shyness. I was a member of the as I idle away the hours, I can remind Each January I travel to Australia to see my

NSW Youth team and we travelled to all the myself that lots of bridge players are keen parents, my friends and my delightful niece

capital cities in Australia and we also went poker aficionados. – ten-month-old Coco – and to take part in

across the Tasman Sea to New Zealand. No matter how my day goes, I always try the Gold Coast Congress. This year I am

All my friends in Ballina were Surfies to hit the gym for a class or a run. My playing in the Canberra tournament too.

who spent their days on the beach, catching favourite class is body pump which is an

the next wave. No one at school knew I was hour of weight-bearing exercises set to Personal Life

ed to feature me in an article … and my behind. I think it is very important for Hugh is an avid bridge player like me but he

secret was out! bridge players to be fit in mind and body. is also a busy infectious disease consultant

Whenever I am away at an important in Leeds. He uses all his holidays to attend

run before the day begins as it improves my fine. We play mixed events together and do

The best tournament in Australia is the concentration and energy. quite well. We go to Ireland quite often, and

Gold Coast Congress: you can swim and play in the Irish country congresses.

laze around on the beach in the morning, Tournament Life Because of bridge dominating most of

play bridge all afternoon and evening – and my life, I feel like the busiest person in the

the après bridge parties are great! It was at At the Venice Cup, bridge began at 10am world. I am always doing something and

the GC Congress in 2005 that I met the and finished at 7pm, then it was out for wish I had more time to attend art house

Irish international Hugh McGann, and so I dinner, a quick look over the boards, then cinema, or walk in the Yorkshire Dales and

made a big move all the way to Harrogate on to sleep only to repeat the same pattern read more books.

to live with him. My life since then has over and over again for an entire two

changed from being a full-time uni student weeks. Not to mention all the pre- Thoughts on Bridge

graduate and a member of the England hours of learning the system and bidding I rarely spend a weekend at home. Bridge

women’s team. hundreds of practice hands online with my has been very good for me. I have travelled

bridge partner, Suzy Stockdale. to many countries and enjoyed different

Work Bridge brings its highs and lows and I foods, wines and cultures. Most of my

Because of my bridge commitments, having in bridge tournaments. It’s so wonderful a hand or a new convention to discuss.

a ‘proper’ full time IT job would be im- when we do well, and so disappointing I sometimes wonder how my life would

possible, so I work part-time at an inde- when things go wrong. have turned out had I not been a bridge

pendent pharmacy. I am not a morning These long tournaments can be really player. Some well-paid computing job in

person and especially find it hard on the draining mentally, physically and emotio- Sydney, life on the beach, surfing, parties,

cold mornings to remove myself from the nally and it is really important to stay the Manly ferry, sunshine – hey, that’s not

‘doona’ (must be my Australian background focused and not let the highs and lows too bad! But I still think the life of a bridge

. . . all that sunshine). My employers are interfere with your decisions at the table. player is better. r