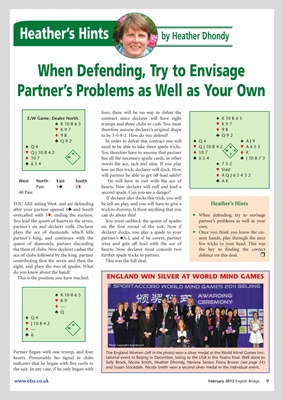 When Defending, Try to Envisage

Partner’s Problems as Well as Your Own

four, there will be no way to defeat the

low on this trick, declarer will duck. How ™ Void

will partner be able to get off lead safely? t AQJ65432

Pass 1® 5t hearts. Now declarer will ruff and lead a

All Pass second spade. Can you see a danger?

If declarer also ducks this trick, you will

YOU ARE sitting West, and are defending be left on play, and you will have to give a Heather’s Hints

after your partner opened 1® and South trick to dummy. Is there anything that you

overcalled with 5t, ending the auction. can do about this? • When defending, try to envisage

You lead the queen of hearts to the seven, You must unblock the queen of spades partner’s problems as well as your

partner’s six and declarer ruffs. Declarer on the first round of the suit. Now if own.

plays the ace of diamonds, which fells declarer ducks, you play a spade to your • Once you think you know the un-

partner’s king, and continues with the partner’s ´A-J, and if he covers, partner seen hands, play through the next

queen of diamonds, partner discarding wins and gets off lead with the ace of few tricks in your head. This was

ace of clubs followed by the king, partner further spade tricks to partner. defence on this deal. r

contributing first the seven and then the This was the full deal:

eight, and plays the two of spades. What

do you know about the hand?

This is the position you have reached: ENGLAND WIN SILVER AT WORLD MIND GAMES

Partner began with one trump, and four The England Women (left in the photo) won a silver medal at the World Mind Games invi-

hearts. Presumably his signal in clubs tational event in Beijing in December, losing to the USA in the Teams final. Well done to

the suit. In any case, if he only began with and Susan Stockdale. Nicola Smith won a second silver medal in the Individual event.