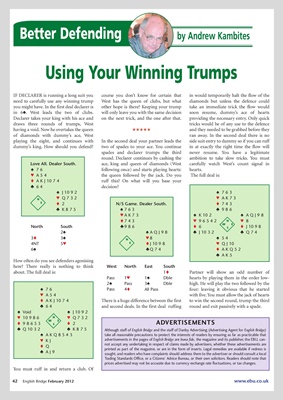 need to carefully use any winning trump West has the queen of clubs, but what diamonds but unless the defence could

you might have. In the first deal declarer is other hope is there? Keeping your trump take an immediate trick the flow would

in 6´. West leads the two of clubs. will only leave you with the same decision soon resume, dummy’s ace of hearts

Declarer takes your king with his ace and on the next trick, and the one after that. providing the necessary entry. Only quick

draws three rounds of trumps, West tricks would be of any use to the defence

having a void. Now he overtakes the queen HHHHH and they needed to be grabbed before they

of diamonds with dummy’s ace, West ran away. In the second deal there is no

playing the eight, and continues with In the second deal your partner leads the side suit entry to dummy so if you can ruff

dummy’s king. How should you defend? two of spades to your ace. You continue in at exactly the right time the flow will

spades and declarer trumps the third never resume. You have a legitimate

round. Declarer continues by cashing the ambition to take slow tricks. You must

™ A54 the queen followed by the jack. Do you The full deal is:

How often do you see defenders agonising

here? There really is nothing to think West North East South

about. The full deal is: 1t Partner will show an odd number of

2´ Pass 3´ Dble high. He will play the two followed by the

´ 76 Pass 4t All Pass four: leaving it obvious that he started

™ A54 with five. You must allow the jack of hearts

t A K J 10 7 4 There is a huge difference between the first to win the second round, trump the third

® 64 and second deals. In the first deal ruffing round and exit passively with a spade.

™ KJ advertisements in the pages of English Bridge are bona fide, the magazine and its publisher, the EBU, can-

not accept any undertaking in respect of claims made by advertisers, whether these advertisements are

printed as part of the magazine, or are in the form of inserts. Legal remedies are available if redress is

® AJ9 sought, and readers who have complaints should address them to the advertiser or should consult a local

Trading Standards Office, or a Citizens’ Advice Bureau, or their own solicitors. Readers should note that

You must ruff in and return a club. Of