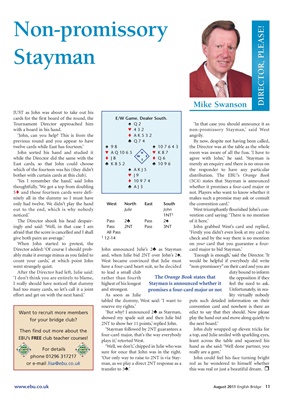 JUST as John was about to take out his

cards for the first board of the round, the E/W Game. Dealer South.

with a board in his hand. ™ 432 non-promissory Stayman,’ said West

previous round and you appear to have ® Q74 By now, despite not having been called,

while the Director did the same with the t J8 S t Q6 agree with John,’ he said. ‘Stayman is

bother with curtain cards at this club). ™ J9 distribution. The EBU’s Orange Book

thoughtfully. ‘We got a top from doubling ® AJ3 whether it promises a four-card major or

5t and those fourteen cards were defi- not. Players who want to know whether it

only had twelve. We didn’t play the hand West North East South the convention card.’

out to the end, which is why nobody Julie John West triumphantly flourished John’s con-

noticed.’ 1NT1 vention card saying: ‘There is no mention

The Director shook his head despair- Pass 2® Pass 2´ of it here.’

ingly and said: ‘Well, in that case I am Pass 2NT Pass 3NT John grabbed West’s card and replied,

give both pairs an average.’ 1 12-14 check and by the way there is no mention

When John started to protest, the on your card that you guarantee a four-

ably make it average minus as you failed to and, when Julie bid 2NT over John’s 2´, ‘Enough is enough,’ said the Director. ‘It

count your cards,’ at which point John West became convinced that Julie must would be helpful if everybody did write

went strangely quiet. have a four-card heart suit, so he decided “non-promissory” on their card and you are

After the Director had left, Julie said: to lead a small club duty bound to inform

‘I don’t think you are entirely to blame, rather than fourth The Orange Book states that the opposition if they

I really should have noticed that dummy highest of his longest Stayman is announced whether it feel the need to ask.

had too many cards, so let’s call it a joint and strongest. promises a four-card major or not Unfortunately, in rea-

effort and get on with the next hand.’ As soon as Julie lity virtually nobody

tabled the dummy, West said: ‘I want to puts such detailed information on their

reserve my rights.’ convention card and nowhere is there an

Want to recruit more members ‘But why? I announced 2® as Stayman, edict to say that they should. Now please

for your bridge club? showed my spade suit and then Julie bid play the hand out and move along quietly to

four-card major, that’s the way everybody a top, and Julie smiled with sparkling eyes,

EBU’s FREE club teacher courses! plays it,’ retorted West. leant across the table and squeezed his

‘Well, we don’t,’ chipped in Julie who was hand as she said: ‘Well done partner, you

sure for once that John was in the right. really are a gem.’

or e-mail lisa@ebu.co.uk man, as we play a direct 2NT response as a red as he wondered to himself whether

transfer to 3®.’ this was real or just a beautiful dream. r