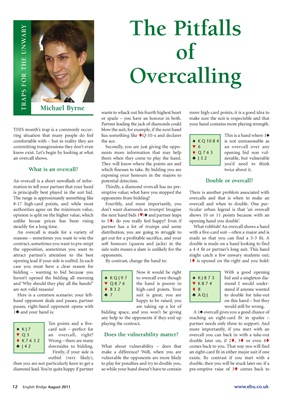 wants to whack out his fourth highest heart more high-card points, it is a good idea to

or spade – you have an honour in both. make sure the suit is respectable and that

Partner leading the jack of diamonds could your hand contains more playing strength.

THIS month’s trap is a commonly occur- blow the suit, for example, if the next hand

comfortable with – but in reality they are the ace. ´ K Q 10 8 4 is not unreasonable as

committing transgressions they don’t even Secondly, you are just giving the oppo- ™ 6 an overcall over any

an overcall shows. them when they come to play the hand. ® J32 nerable, but vulnerable

What is an overcall? which finesses to take. By bidding you are twice about it.

exposing your honours in the majors to

An overcall is a short newsflash of infor- potential detection. Double or overcall?

mation to tell your partner that your hand Thirdly, a diamond overcall has no pre-

is principally best played in the suit bid. emptive value; what have you stopped the There is another problem associated with

The range is approximately something like opponents from bidding? overcalls and that is when to make an

8-17 high-card points, and while most Fourthly, and most importantly, you overcall and when to double. One par-

authorities agree on the minimum value, don’t want diamonds as trumps! Imagine ticular urban legend is that ‘an overcall

opinion is split on the higher value, which the next hand bids 1™/´ and partner leaps shows 10 or 11 points because with an

unlike house prices has been rising to 5t; do you really feel happy? Even if opening hand you double’.

steadily for a long time. partner has a lot of trumps and some What rubbish! An overcall shows a hand

An overcall is made for a variety of distribution, you are going to struggle to with a five-card suit – often a major and is

reasons – sometimes you want to win the get out for a profitable sacrifice, and your made so that you can find a 5-3 fit. A

contract, sometimes you want to pre-empt soft honours (queens and jacks) in the double is made on a hand looking to find

the opposition, sometimes you want to side suits means a slam is unlikely for the a 4-4 fit or partner’s long suit. This hand

attract partner’s attention to the best opponents. might catch a few unwary students out;

opening lead if your side is outbid. In each By contrast, change the hand to: 1t is opened on the right and you hold:

case you must have a clear reason for

are not valid reasons! t 832 high-card points. Your t 8 stand if anyone wanted

Here is a common scenario; your left- ® 7 suit is great, you are ® AQJ to double for take-out

hand opponent deals and passes, partner happy to be raised, you on this hand – but they

passes, right-hand opponent opens with are taking up a lot of would still be wrong.

1® and your hand is: bidding space, and you won’t be giving A 1´ overcall gives you a good chance of

Ten points and a five- playing the contract. partner needs only three to support. And

´ KJ7 card suit – perfect for more importantly, if you start with an

™ Q3 an overcall, right? Does the vulnerability matter? overcall you can back in with a take-out

® J42 downsides to bidding. What about vulnerability – does that comes back to you. That way you will find

Firstly, if your side is make a difference? Well, when you are an eight-card fit in either major suit if one

outbid (very likely), vulnerable the opponents are more likely exists. By contrast if you start with a

then you are not particularly keen to get a to play for penalties and try to double you, double, then you will be stuck later on: if a

diamond lead. You’re quite happy if partner so while your hand doesn’t have to contain pre-emptive raise of 3t comes back to