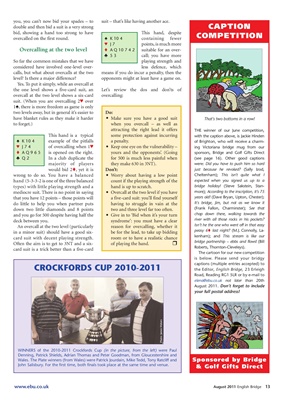 you, you can’t now bid your spades – to suit – that’s like having another ace.

double and then bid a suit is a very strong CAPTION

bid, showing a hand too strong to have This hand, despite

overcalled on the first round. ´ K 10 4 containing fewer COMPETITION

So far the common mistakes that we have playing strength and

considered have involved one-level over- less defence, which

calls, but what about overcalls at the two means if you do incur a penalty, then the

level? Is there a major difference? opponents might at least have a game on.

Yes. To put it simply, while an overcall at

the one level shows a five-card suit, an Let’s review the dos and don’ts of

overcall at the two level shows a six-card overcalling:

suit. (When you are overcalling 2™ over

1´, there is more freedom as game is only

two levels away, but in general it’s easier to Do:

have blanket rules as they make it harder • Make sure you have a good suit That's two bottoms in a row!

to forget.) when you overcall – as well as

attracting the right lead it offers THE winner of our June competition,

This hand is a typical some protection against incurring with the caption above, is Jackie Hinden

´ K 10 4 example of the pitfalls a penalty. of Brighton, who will receive a charm-

t AQ965 is opened on the right. yours and the opponents’. (Going sponsors, Bridge and Golf Gifts Direct

® Q2 In a club duplicate the for 500 is much less painful when (see page 16). Other good captions

majority of players they make 630 in 3NT). were: Did you have to push him so hard

would bid 2t, yet it is Don’t: just because he revoked? (Sally Izod,

wrong to do so. You have a bal anced • Worry about having a low point Cheltenham); This isn't quite what I

expected when you signed us up to a

types) with little playing strength and a hand is up to scratch. bridge holiday! (Steve Sakstein, Stan-

mediocre suit. There is no point in saying • Overcall at the two level if you have more); According to the inscription, it’s 75

that you have 12 points – those points will a five-card suit: you’ll find yourself

do little to help you when partner puts having to struggle in vain at the It's bridge, Jim, but not as we know it

and you go for 500 despite having half the • Give in to ‘Bid when it’s your turn chap down there, walking towards the

river with all those rocks in his pockets?

deck between you. syndrome’: you must have a clear

An overcall at the two level (particularly reason for overcalling, whether it Isn’t he the one who went off in that easy

in a minor suit) should have a good six- be for the lead, to take up bidding peasy 6t last night? (M.J. Connolly, La-

card suit with decent playing strength. room or to have a realistic chance kenham); and This stream is like our

Often the aim is to get to 3NT and a six- of playing the hand. r bridge partnership – ebbs and flows! (Bill

card suit is a trick better than a five-card

Road, Reading RG1 5LR or by e-mail to

John Salisbury. For the first time, both finals took place at the same time and venue.