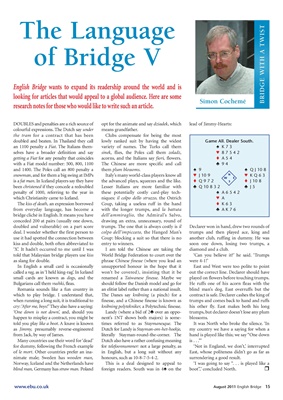 looking for articles that would appeal to a global audience. Here are some

research notes for those who would like to write such an article.

DOUBLES and penalties are a rich source of opt for the animate and say dziadek, which lead of Jimmy-Hearts:

doubled and beaten. In Thailand they call lowly ranked suit by having the widest Game All. Dealer South.

selves have a broader definition and say sinek, flies, the Poles call them zoladz, ™ 87542

getting a Fiat for any penalty that coincides acorns, and the Italians say fiori, flowers. t A54

is a fat man. In Iceland players say they have the advanced plays, squeezes and the like. t Q972 S t J 10 8

penalty of 1000, referring to the year in these potentially costly card-play tech- ´ A6542

which Christianity came to Iceland. niques: il colpo dello struzzo, the Ostrich ™ A

The kiss of death, an expression borrowed Coup, taking a useless ruff in the hand t K63

from everyday language, has become a with the longer trumps, and la battuta ® AK76

bridge cliché in English. It means you have dell’ammiraglio, the Admiral’s Salvo,

conceded 200 at pairs (usually one down, drawing an extra, unnecessary, round of

doubled and vulnerable) on a part score trumps. The one that is always costly is il Declarer won in hand, drew two rounds of

deal. I wonder whether the first person to colpo dell'impiccato, the Hanged Man’s trumps and then played ace, king and

use it had spotted the connection between Coup: blocking a suit so that there is no another club, ruffing in dummy. He was

kiss and double, both often abbreviated to entry to winners. soon one down, losing two trumps, a

‘X’. It hadn’t occurred to me until I was I am told the Chinese are taking the diamond and a club.

told that Malaysian bridge players use kiss World Bridge Federation to court over the ‘Can you believe it?’ he said. ‘Trumps

as slang for double. phrase Chinese finesse (where you lead an were 4-1!’

called a rag, as in ‘I held king-rag’. In Iceland won’t be covered), insisting that it be out the correct line. Declarer should have

small cards are known as dogs, and the renamed a Taiwanese finesse. Maybe we played on flowers before touching trumps.

Bulgarians call them vushki, fleas. should follow the Danish model and go for He ruffs one of his acorn fleas with the

Romania sounds like a fun country in an elitist label rather than a national insult. blind man’s dog. East overruffs but the

which to play bridge. I understand that, The Danes say knibning (a pinch) for a contract is safe. Declarer cashes the king of

when running a long suit, it is traditional to finesse, and a Chinese finesse is known as trumps and comes back to hand and ruffs

cry: ‘After me, boys!’ They also have a saying: knibning polytekniker, a Polytechnic finesse. his other fly. East makes both his long

‘One down is not down’, and, should you Landy (where a bid of 2® over an oppo- trumps, but declarer doesn’t lose any plum

happen to misplay a contract, you might be nent’s 1NT shows both majors) is some- blossoms.

told you play like a boot. A knave is known times referred to as Staymanesque. The It was North who broke the silence. ‘In

as Jimmy, presumably reverse-engineered Dutch for Landy is Stayman-om-het-hoekje, my country we have a saying for when a

from Jack, by way of James. literally Stayman-round-the-corner. The hand is played like this; we say “One down

Many countries use their word for ‘dead’ Dutch also have a rather confusing meaning is . . .’’’

for dummy, following the French example for telefoonnummer: not a large penalty, as ‘Not in England, we don’t,’ interrupted

of le mort. Other countries prefer an ina- in English, but a long suit without any East, whose politeness didn’t go as far as

Norway, Iceland and the Netherlands have This is a deal designed to appeal to ‘I was going to say “. . . is played like a