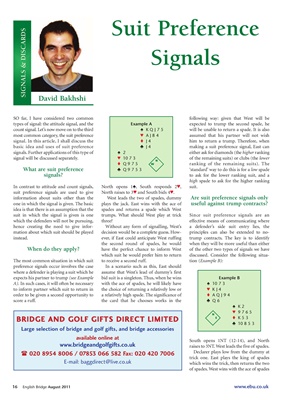 SO far, I have considered two common following way: given that West will be

types of signal: the attitude signal, and the Example A expected to trump the second spade, he

count signal. Let’s now move on to the third ´ KQJ75 will be unable to return a spade. It is also

most common category, the suit preference ™ AJ84 assumed that his partner will not wish

signal. In this article, I shall discuss the t J4 him to return a trump. Therefore, when

signals. Further applications of this type of ´ 2 either ask for diamonds (the higher ranking

of the remaining suits) or clubs (the lower

t Q975 W ranking of the remaining suits). The

signals? to ask for the lower ranking suit, and a

high spade to ask for the higher ranking

suit preference signals are used to give North raises to 3™ and South bids 4™.

information about suits other than the West leads the two of spades, dummy Are suit preference signals only

one in which the signal is given. The basic plays the jack. East wins with the ace of useful against trump contracts?

suit in which the signal is given is one trumps. What should West play at trick Since suit preference signals are an

which the defenders will not be pursuing, three? effective means of communicating where

hence creating the need to give infor- Without any form of signalling, West’s a defender’s side suit entry lies, the

mation about which suit should be played decision would be a complete guess. How- principles can also be extended to no-

instead. ever, if East could anticipate West ruffing trump contracts. The key is to identify

the second round of spades, he would when they will be more useful than either

When do they apply? have the perfect chance to inform West of the other two types of signals we have

which suit he would prefer him to return discussed. Consider the following situa-

The most common situation in which suit to receive a second ruff. tion (Example B):

preference signals occur involves the case In a scenario such as this, East should

expects his partner to trump (see Example bid suit is a singleton. Thus, when he wins Example B

order to be given a second opportunity to a relatively high spade. The significance of t AQJ94

score a ruff. the card that he chooses works in the ® Q6

Large selection of bridge and golf gifts, and bridge accessories

www.bridgeandgolfgifts.co.uk raises to 3NT. West leads the five of spades.

trick one. East plays the king of spades

E-mail: baggdirect@live.co.uk which wins the trick, then returns the two

of spades. West wins with the ace of spades