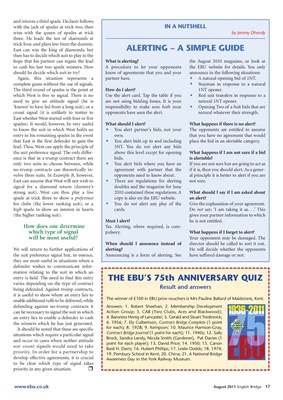 with the jack of spades at trick two, then IN A NUTSHELL

wins with the queen of spades at trick by Jeremy Dhondy

three. He leads the ten of diamonds at

trick four, and plays low from the dummy.

East can win the king of diamonds, but ALERTING – A SIMPLE GUIDE

then has to decide which suit to play in the

hope that his partner can regain the lead What is alerting? the August 2010 magazine, or look at

to cash his last two spade winners. How A procedure to let your opponents the EBU website for details. You only

should he decide which suit to try? know of agreements that you and your announce in the following situations:

Again, this situation represents a partner have. • A natural opening bid of 1NT.

complete guess without the use of signals. • Stayman in response to a natural

The third round of spades is the point at How do I alert? 1NT opener.

which West is free to signal. There is no Use the alert card. Tap the table if you • Red suit transfers in response to a

need to give an attitude signal (he is are not using bidding boxes. It is your natural 1NT opener.

‘known’ to have led from a long suit), or a responsibility to make sure both your • Opening Two of a Suit bids that are

count signal (it is unlikely to matter to opponents have seen the alert. natural whatever their strength.

East whether West started with four or five

spades). It would, however, be very useful What should I alert? What happens if there is no alert?

to know the suit in which West holds an • You alert partner’s bids, not your The opponents are entitled to assume

entry to his remaining spades in the event own. that you have no agreement that would

that East is the first defender to gain the • You alert bids up to and including place the bid in an alertable category.

lead. Thus, West can apply the principle of 3NT. You do not alert any bids

the suit preference signal. The only differ- above this level except for opening What happens if I am not sure if a bid

ence is that in a trump contract there are bids. is alertable?

only two suits to choose between, while • You alert bids where you have an If you are not sure but are going to act as

no-trump contracts can theoretically in- agreement with partner that the if it is, then you should alert. As a gener-

volve three suits. In Example B, however, opponents need to know about. al principle it is better to alert if you are

East can assume that West will not wish to • There are regulations for alerting not sure.

strong suit). West can thus play a low 2010 contained these regulations. A What should I say if I am asked about

spade at trick three to show a preference copy is also on the EBU website. an alert?

for clubs (the lower ranking suit), or a • You do not alert any play of the Give the explanation of your agreement.

high spade to show an interest in hearts cards. Do not say: ‘I am taking it as. . .’ This

(the higher ranking suit). gives your partner information to which

Must I alert? he is not entitled.

How does one determine Yes. Alerting, where required, is com-

which type of signal pulsory. What happens if I forget to alert?

will be most useful? Your opponents may be damaged. The

When should I announce instead of director should be called to sort it out.

We will return to further applications of alerting? He will decide whether the opponents

the suit preference signal but, in essence, Announcing is a form of alerting. See have suffered damage or not.

they are most useful in situations where a

mation relating to the suit in which an

entry is held. The need to find this entry

varies depending on the type of contract

being defended. Against trump contracts, Result and answers

it is useful to show where an entry lies to

The winner of £100 in EBU prize vouchers is Mrs Pauline Ballard of Maidstone, Kent.

enable additional ruffs to be delivered, while

can be necessary to signal the suit in which Action Group; 3. CAB (Two Clubs, Aces and Blackwood);

an entry lies to enable a defender to cash 4. Baroness Henig of Lancaster; 5. Gerald and Stuart Tredinnick;

the winners which he has just generated. 6. 1956; 7. Ely Culbertson, Contract Bridge Complete (1 point

and occur in cases where neither attitude

nor count signals would need to take

priority. In order for a partnership to 19. Pembury School in Kent; 20. China; 21. A National Bridge

develop effective agreements, it is crucial Awareness Day in the York Railway Museum.

to be clear which type of signal takes

priority in any given situation. r