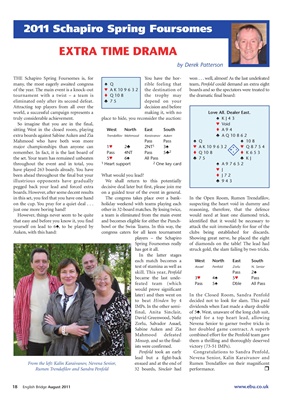 THE Schapiro Spring Foursomes is, for You have the hor- won . . . well, almost! As the last undefeated

many, the most eagerly awaited congress ´ Q rible feeling that team, Penfold could demand an extra eight

of the year. The main event is a knock-out ™ A K 10 9 6 3 2 the destination of boards and so the spectators were treated to

tournament with a twist – a team is t Q 10 8 the trophy may the dramatic final board:

eliminated only after its second defeat. ® 75 depend on your

Attracting top players from all over the decision and before

world, a successful campaign represents a making it, with no Love All. Dealer East.

So imagine that you are in the final, ™ Void

have played 263 boards already. You have ™ J

been ahead throughout the final but your What would you lead? t J72

illustrious opponents have gradually We shall return to this potentially ® 943

pegged back your lead and forced extra decisive deal later but first, please join me

boards. However, after some decent results on a guided tour of the event in general.

in this set, you feel that you have one hand The congress takes place over a bank- In the Open Room, Rumen Trendafilov,

on the cup. You pray for a quiet deal . . . holiday weekend with teams playing each suspecting the heart void in dummy and

just one more boring hand! other in 32-board matches. By losing twice, reasoning, therefore, that the defence

However, things never seem to be quite a team is eliminated from the main event would need at least one diamond trick,

that easy and before you know it, you find and becomes eligible for either the Punch- identified that it would be necessary to

yourself on lead to 6´, to be played by bowl or the Swiss Teams. In this way, the attack the suit immediately for fear of the

Auken, with this hand: congress caters for all keen tournament clubs being established for discards.

players – the Schapiro Showing great nerve, he placed the eight

Spring Foursomes really of diamonds on the table! The lead had

has got it all. struck gold, the slam failing by two tricks.

In the latter stages

later) and then went on In the Closed Room, Sandra Penfold

to beat Hinden by 4 decided not to look for slam. This paid

IMPs. In the other semi- dividends when East made a sharp double

Sabine Auken and Zia her doubled game contract. A superb

Mossop, and so the final- them a thrilling and thoroughly deserved

lead but a fight-back Nevena Senior, Kalin Karaivanov and

From the left: Kalin Karaivanov, Nevena Senior, ensued and at the end of Rumen Trendafilov on their magnificent