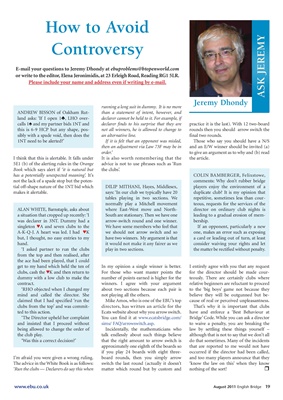 running a long suit in dummy. It is no more

ANDREW BISSON of Oakham Rut- than a statement of intent, however, and

land asks: ‘If I open 1®, LHO over- declarer cannot be held to it. For example, if

calls 1´ and my partner bids 1NT and declarer finds to his surprise that they are practice it is the last). With 12 two-board

this is 6-9 HCP but any shape, pos- not all winners, he is allowed to change to rounds then you should arrow switch the

sibly with a spade void, then does the an alternative line. final two rounds.

1NT need to be alerted?’ If it is felt that an opponent was misled, Those who say you should have a N/S

order.’ to give an argument as to why and (b) read

I think that this is alertable. It falls under It is also worth remembering that the the article.

Book which says alert if ‘it is natural but the clubs’.

not the lack of a spade stop but the poten- comments: Why don’t rubber bridge

tial off-shape nature of the 1NT bid which DILIP MITHANI, Hayes, Middlesex, players enjoy the environment of a

makes it alertable. says: ‘In our club we typically have 20 duplicate club? It is my opinion that

normally play a Mitchell movement teous, requests for the services of the

ALAN WHITE, Barnstaple, asks about where East-West move and North- director on ordinary club nights is

a situation that cropped up recently: ‘I South are stationary. Then we have one leading to a gradual erosion of mem-

was declarer in 3NT. Dummy had a arrow-switch round and one winner. bership.

singleton ™A and seven clubs to the We have some members who feel that If an opponent, particularly a new

A-K-Q-J. A heart was led. I had ™K we should not arrow switch and so one, makes an error such as exposing

but, I thought, no easy entries to my have two winners. My argument is that a card or leading out of turn, at least

hand. it would not make it any fairer as we consider waiving your rights and let

‘I asked partner to run the clubs play in two sections. the matter be rectified without penalty.

from the top and then realised, after

the ace had been played, that I could

get to my hand which held the ten of In my opinion a single winner is better. I entirely agree with you that any request

clubs, cash the ™K and then return to For those who want master points the for the director should be made cour-

dummy with a low club to make the number of points earned is higher for the teously. There are certainly clubs where

contract. winners. I agree with your argument relative beginners are reluctant to proceed

mind and called the director. She not playing all the others. believe they will be outgunned but be-

claimed that I had specified ‘run the Mike Amos, who is one of the EBU’s top cause of real or perceived unpleasantness.

clubs from the top’ and was commit- directors, has written an article for the That’s why it is important that clubs

ted to this action. Ecats website about why you arrow switch. have and enforce a ‘Best Behaviour at

‘The Director upheld her complaint You can find it at www.ecatsbridge.com/ Bridge’ Code. While you can ask a director

and insisted that I proceed without sims/ FAQ/arrowswitch.asp. to waive a penalty, you are breaking the

being allowed to change the order of Incidentally, the mathematicians who law by settling these things yourself –

the club play. talk endlessly about such things believe although that is not to say that we don’t all

‘Was this a correct decision?’ that the right amount to arrow switch is do that sometimes. Many of the incidents

if you play 24 boards with eight three- occurred if the director had been called,

I’m afraid you were given a wrong ruling. board rounds, then you simply arrow and too many players announce that they

The advice in the White Book is as follows: switch the last round (actually it doesn’t ‘know the law on this’ when they know

‘Run the clubs — Declarers do say this when matter which round but by custom and nothing of the sort! r