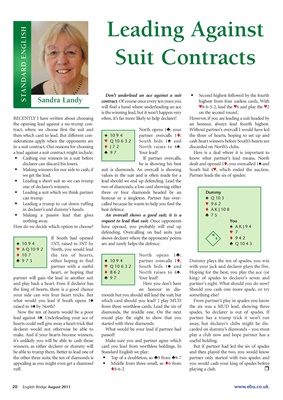 contract. Of course once every ten years you highest from four useless cards. With

is the winning lead, but it won’t happen very on the second round.

RECENTLY I have written about choosing often, it’s far more likely to help declarer! However, if you are leading a suit headed by

the opening lead against a no-trump con- an honour, always lead fourth highest.

tract, where we choose first the suit and North opens 1®; your Without partner’s overcall I would have led

then which card to lead. But different con- ´ 10 9 4 partner overcalls 1t; the three of hearts, hoping to set up and

in a suit contract. Our reasons for choosing t J72 North raises to 4´. discarded on North’s clubs.

a lead against a suit contract might include: ® 97 Your lead? Here is a deal where it is important to

• Cashing our winners in a suit before If partner overcalls, know what partner’s lead means. North

declarer can discard his losers. he is showing his best dealt and opened 1t, you overcalled 1´ and

• Making winners for our side to cash, if suit is diamonds. An overcall is showing South bid 4™, which ended the auction.

we get the lead. values in the suit and is often made for a Partner leads the six of spades:

• Leading a short suit so we can trump lead should we end up defending. Lead the

one of declarer’s winners. two of diamonds, a low card showing either

• Making a passive lead that gives An overcall shows a good suit; it is a ® 75

nothing away. request to lead that suit. Once opponents You

How do we decide which option to choose? have opened, you probably will end up ´ AKJ94

partner will gain the lead in another suit ® 97 Your lead? king) of spades to declarer’s seven and

and play back a heart. Even if declarer has Here you don’t have partner’s eight. What should you do now?

the king of hearts, there is a good chance an honour in dia- Should you cash one more spade, or try

your side can win four heart tricks. But monds but you should still lead the suit; but something else?

what would you lead if South opens 1´ which card should you lead? I play MUD From partner’s play in spades you know

raised to 4´ by North? from three worthless cards. Lead the six of the six was a MUD lead, showing three

Now the ten of hearts would be a poor diamonds, the middle one. On the next spades. So declarer is out of spades. If

lead against 4´. Underleading your ace of round play the eight to show that you partner has a trump trick it won’t run

hearts could well give away a heart trick that started with three diamonds. away, but declarer’s clubs might be dis-

make. And if your hearts become winners, passed? play a club now and hope partner has a

it’s unlikely you will be able to cash those Make sure you and partner agree which useful holding.

winners, as either declarer or dummy will card you lead from worthless holdings. In But if partner had led the six of spades

be able to trump them. Better to lead one of Standard English we play: and then played the two, you would know

the other three suits; the ten of diamonds is • Top of a doubleton, so ®9 from ®9-7 partner only started with two spades and

appealing as you might even get a diamond • Middle from three small, so t6 from you would cash your king of spades before