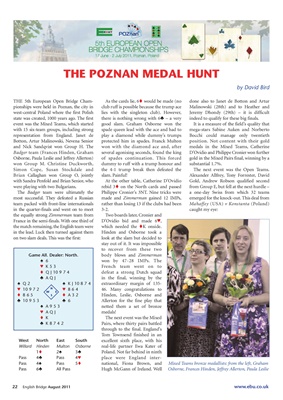 THE 5th European Open Bridge Cham- As the cards lie, 6t would be made (no done also to Janet de Botton and Artur

pionships were held in Poznan, the city in club ruff is possible because the trump ace Malinowski (28th) and to Heather and

west-central Poland where the first Polish lies with the singleton club). However, Jeremy Dhondy (29th) – it is difficult

state was created, 1000 years ago. The first there is nothing wrong with 6® – a very indeed to qualify for these big finals.

event was the Mixed Teams, which started good slam. Graham Osborne won the It is a measure of the field’s quality that

with 15 six-team groups, including strong spade queen lead with the ace and had to mega-stars Sabine Auken and Norberto

representation from England. Janet de play a diamond while dummy’s trumps Bocchi could manage only twentieth

and Nick Sandqvist won Group H. The won with the diamond ace and, after medals in the Mixed Teams, Catherine

Osborne, Paula Leslie and Jeffrey Allerton) of spades continuation. This forced gold in the Mixed Pairs final, winning by a

Simon Cope, Susan Stockdale and the 4-1 trump break then defeated the The next event was the Open Teams.

with Sandra Penfold and Brian Senior, who At the other table, Catherine D’Ovidio Gold, Andrew Robson qualified second

were playing with two Bulgarians. rebid 3t on the North cards and passed from Group E, but fell at the next hurdle –

The Badger team were ultimately the Philippe Cronier’s 3NT. Nine tricks were a one-day Swiss from which 32 teams

most successful. They defeated a Russian made and Zimmerman gained 12 IMPs, emerged for the knock-out. This deal from

in the quarter-finals and went on to meet 3-2. caught my eye:

France in the semi-finals. With one third of D’Ovidio bid and made 6™,

the match remaining, the English team were which needed the tK onside.

in the lead. Luck then turned against them Hinden and Osborne took a

on two slam deals. This was the first: look at the slam but decided to

stay out of it. It was impossible

to recover from these two

® AQJ in the final, winning by the

t K The next event was the Mixed

through to the final. England’s

Tom Townsend finished in an