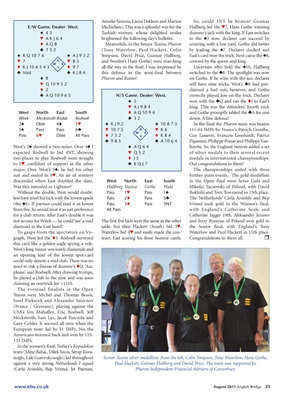 Anneke Simons, Laura Dekkers and Marion So, could 3NT be beaten? Gunnar

E/W Game. Dealer: West. Michielsen). This was a splendid win for the Hallberg led the ™7, Hans Gothe winning

´ 43 Turkish women, whose delighted smiles dummy’s jack with the king. If East switches

™ AKJ64 brightened the following day’s bulletin. to the ´3 now, declarer can succeed by

t AQ8 Meanwhile, in the Senior Teams, Pharon covering with a low card. Gothe did better

™ 7 N ™ 83 and Sweden’s Hans Gothe) were marching covered by the queen and king.

® Void ® KJ84 this defence in the semi-final between switched to the ®8. The spotlight was now

´ 8 Pharon and Kutner: on Gothe. If he wins with the ace, declarer

t 2 claimed a bad suit, however, and Gothe

™ AJ984 king. This was the defenders’ fourth trick

to 5™, confident of support in the other ® KQJ7 Our congratulations to them!

major. Over West’s 5´, he bid his other The championships ended with three

suit and ended in 6™. An air of mystery further pairs events. The gold medallists

descended when East doubled the slam. West North East South in the Open final were Artur Gula and

Was this intended as Lightner? Hallberg Stasica Gothe Wala Mikolaj Taczewski of Poland, with David

Without the double, West would doubt- Pass 1™ Pass 1´ Bakhshi and Tom Townsend in 13th place.

(the ´6). If partner could read it as lowest Pass 3t Pass 3NT Vriend took gold in the Women’s final,

from five, he would treat it as suit preference All Pass with England’s Catherine Seale and

for a club return. After East’s double it was Catherine Jagger 19th. Aleksander Jezioro

diamond in the East hand! table, but then Hackett (South) bid 3™. the Senior final, with England’s Tony

To gasps from the spectators on Vu- Waterlow bid 4™ and easily made the con- Waterlow and Paul Hackett in 11th place.

this card like a golden eagle spying a vole.

an opening lead of the lowest spot-card

could only denote a void club. There was no

need to risk a finesse of dummy’s tQ. ‘Ace,

he played a club to the nine and was soon

The eventual finalists in the Open

Teams were Michel and Thomas Bessis,

(France / Germany), playing against the

Gary Cohler. It seemed all over when the

European team led by 51 IMPs. No, the

Americans stormed back and won by 155-

In the women’s final, Turkey’s Kapadokya

against a very strong Netherlands I squad Paul Hackett, Gunnar Hallberg and David Price. The team was supported by