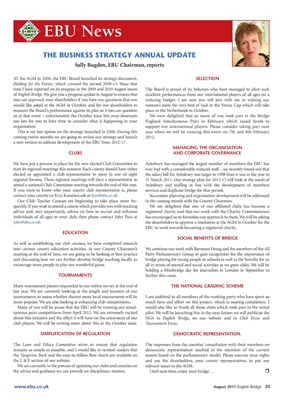 AT the AGM in 2008, the EBU Board launched its strategy document, SELECTION

Bidding for the Future. which covered the period 2009-13. Since that

of English Bridge. We give you a progress update in August to ensure that excellent performances from our international players of all ages on a

you can approach your shareholders if you have any questions that you reducing budget. I am sure you will join with me in wishing our

would like asked at the AGM in October, and for our shareholders to women’s team the very best of luck in the Venice Cup which will take

measure the Board’s performance against its plan so it too can question place in the Netherlands in October.

This is my last update on the strategy launched in 2008. During this year when we will be running this event on 7th and 8th February

coming twelve months we are going to review our strategy and launch 2012.

a new version to address development of the EBU from 2012-17.

start its regional meetings this autumn. Each county should have either ever had with a considerably reduced staff – we recently found out that

regional forums. These regional meetings will elect a representative to 31 March 2011. Our strategy plan for 2012-17 will look at the needs of

attend a national Club Committee meeting towards the end of this year. Aylesbury and staffing in line with the development of members

If you want to know who your county club representative is, please services and duplicate bridge for that period.

contact your county or Krys Kazmierczak at krys@ebu.co.uk. Succession planning and organisation development will be addressed

Our Club Teacher Courses are beginning to take place more fre- in the coming month with the County Chairmen.

quently. If you wish to attend a course which provides you with teaching We are delighted that one of our affiliated clubs has become a

advice and, very importantly, advice on how to recruit and welcome registered charity and that our work with the Charity Commissioners

individuals of all ages to your club, then please contact John Pain at has encouraged us to formalise our approach to them. We will be asking

john@ebu.co.uk. the shareholders to approve a resolution at the AGM in October for the

EBU to work towards becoming a registered charity.

As well as establishing our club courses, we have completed research

into current county education activities. At our County Chairmen’s We continue our work with Baroness Henig and the members of the All

meeting at the end of June, we are going to be looking at best practice Party Parliamentary Group to gain recognition for the importance of

encourage more people to play our wonderful game. all in terms of mental and social activities as we grow older. We will be

holding a Minibridge day for journalists in London in September to

TOURNAMENTS further this cause.

last year. We are currently looking at the length and location of our

more popular. We are also looking at enhancing club competitions. much time and effort on this project, which is nearing completion. I

taneous pairs competitions from April 2012. We are extremely excited pilot. We will be launching this in the near future; we will publicise the

about this initiative and the effect it will have on the enjoyment of our NGS in English Bridge, on our website and in Club Focus and

club players. We will be writing more about this in the October issue. Tournament Focus.

remains as simple as possible, and I would like to remind readers that democratic representation resulted in the retention of the current

the Tangerine Book and the easy-to-follow flow charts are available on system based on the parliamentary model. Please exercise your rights

the L & E section of our website. and use the shareholders, your county representatives, to put any

We are currently in the process of updating our clubs and counties on relevant issues to the AGM.

the advice and guidance we can provide on disciplinary matters. Until next time, enjoy your bridge . . . r