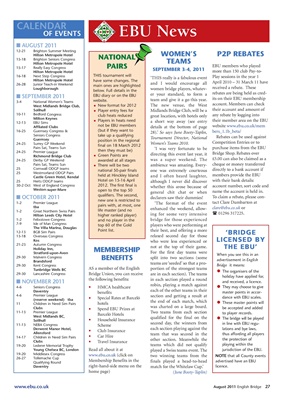 ‘THIS really is a fabulous event

and I would encourage all

below. Full details in the

er your standard, to form a rebates are being held as cred-

n SEPTEMBER 2011 EBU diary or on the EBU

its on their EBU membership

3-4 National Women's Teams website. team and give it a go this year.

Solihull • Player entry fees for Midlands Bridge Club, will be a their account and amount of

great location, with hotels only

Affliated Clubs not be EBU members details at the bottom of page website www.ebu.co.uk/mem

Seniors Congress take up a qualifying Rebates can be used against

position in the regional Competition Entries or to

Pairs Sat, Teams Sun ‘I was very fortunate to be purchase items from the EBU

directing this event last year, it Bridge Shop. Rebates over

24-25 Derby GP Weekend awarded at all stages was a super weekend. The £5.00 can also be claimed as a

Pairs Sat, Teams Sun • There will be two ambience was amazing. Every- cheque or money transferred

25 Cornwall ODGP teams directly to a bank account if

25 Herts ODGP teams Hotel on 15-16 April although I never did discover with their bank details:

30-2 Oct West of England Congress 2012. The first final is whether this arose because of account number, sort code and

Weston-super-Mare open to the top 50

general chit chat or when name the account is held in.

n OCTOBER 2011 new one is restricted to

declarers saw their dummies! To claim a rebate, please con-

tba pairs with, at most, one

enhanced the weekend, allow- clare@ebu.co.uk or

not at the top of their game. THE EBU’

Stratford-upon-Avon For the first day teams were

When you see this in an

BENEFITS split into two sections (some advertisement in English

teams are ‘seeded’ so that a pro- Bridge it means:

AS a member of the English portion of the strongest teams

Lancashire Congress Bridge Union, you can receive are in each section). The teams • The organisers of the

holiday have applied for,

the following benefits: in each section played a round

n NOVEMBER 2011 and received, a licence.

robin, playing a match against

each of the other teams in their

• They may choose to give

4-6 Premier League section and getting a result at

11 Children in Need Sim Pairs hotels the end of each match, which

was charted on a large board.

• These master points will

Two teams from each section

be accepted and added

Solihull • Household Insurance qualified for the final on the

second day, the winners from

• The bridge will be played

in line with EBU regu-

Derwent Manor Hotel, each section playing against the lations and bye laws,

team that was second in the thus affording all players

other section. Meanwhile the the protection of

teams which did not qualify playing within the

Young Chelsea BC, London Read all about it at played a Swiss teams event. The jurisdiction of the EBU.

two winning teams from the NOTE that all County events

Daventry right-hand-side menu on the match for the Whitelaw Cup.’ licence.