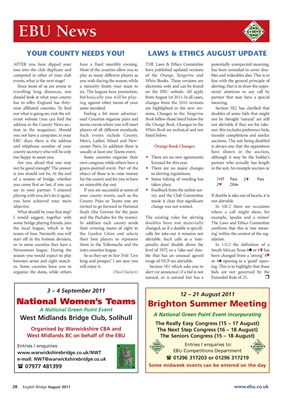 AFTER you have dipped your have a fixed monthly evening. THE Laws & Ethics Committee potentially unexpected meaning,

competed in other of your club play as many different players as of the Orange, Tangerine and bles and redoubles also. This is in

events, what is the next stage? you wish during the season, while White Books. These versions are line with the general principle of

Since most of us are averse to a minority limits your team to electronic only and can be found alerting, that is to draw the oppo-

travelling long distances, one six. The leagues have promotion, on the EBU website. All apply nents’ attention to any call by

should look at what your county but basically you will be play- from August 1st 2011. In all cases, partner that may have a special

has to offer. England has thity- ing against other teams of your changes from the 2010 versions meaning.

nine affiliated counties. To find same standard. are highlighted in the new ver- Section 5E2 has clarified that

out what is going on, visit the rel- Feeling a bit more adventur- sions. Changes to the Tangerine doubles of some bids that might

evant website (you can find the ous? Counties organise pairs and Book follow those listed below for not be thought ‘natural’ are still

address in the County News sec- teams events where you will meet the Orange Book. Changes to the not alertable if they are for take-

tion in the magazine). Should players of all different standards. White Book are technical and not out: this includes preference bids,

you not have a computer, in your Such events include County, listed below. transfer completions and similar

EBU diary there is the address Men’s, Ladies’, Mixed and New- auctions. The suit being doubled

and telephone number of your comer Pairs. In addition there is Orange Book Changes is always one that the opposition

county secretary who will be only usually at least one Teams event. have shown in the auction,

too happy to assist you. Some counties organise their • There are no new agreements although it may be the bidder’s

Are you afraid that you may own congress, while others have a licensed for this year. partner who actually has length

not be good enough? The answer green-pointed event. Part of the • There are no major changes in the suit. An example auction is:

is you should not be. At the end object of these is to raise money to alerting regulations.

of a session of bridge, whether for the county and for you to have • Some tidying of wording has 1NT Pass 2t Pass

you come first or last, if you can an enjoyable day out. taken place. 2™ Dble

say to your partner: ‘I enjoyed If you are successful at some of • Feedback from the online sur-

playing with you, let’s do it again,’ your county events, such as the vey and the Club Committee If double is take out of hearts, it is

you have achieved your main County Pairs or Teams you are made it clear that significant not alertable.

objective. invited to go forward to National change was not wanted. In 10C2 there are occasions

What should be your first step? finals (the Corwen for the pairs where a call might show, for

I would suggest, together with and the Pachabo for the teams). The existing rules for alerting example, ‘spades and a minor'

some bridge playing friends, join In addition each county sends doubles have not materially The Laws and Ethics Committee

the local league, which is for their winning teams of eight to changed, so if a double is specifi- confirms that this is ‘one mean-

teams of four. Normally you will the Garden Cities and selects cally for take-out it remains not ing’ within the context of the reg-

start off in the bottom division, their best players to represent alertable. Such calls as a ‘non- ulation.

Newcomers league. During the inter-counties league. level of 3NT, or a ‘take-out’ dou- South African Texas 4® or 4t has

season you would expect to play So as they say in Star Trek: ‘Live ble that has an unusual agreed been changed from a ‘strong’ 4™

between seven and eight match- long and prosper.’ I am sure you range of HCP are alertable. or 4´ opening to a ‘good’ open-

es. Some counties leave you to will enjoy it. Section 5E1 which asks you to ing. This is to highlight that these

organize the dates, while others (Paul Hackett) alert (or announce) if a bid is not bids are not governed by the

natural, or is natural but has a Extended Rule of 25. r