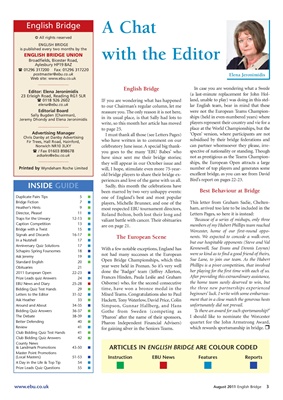 English Bridge In case you are wondering what a Swede

elena@ebu.co.uk to our Chairman’s regular column, let me lar English team, bear in mind that these

Editorial Board reassure you. The only reason it is not here, were not the European Teams Champion-

Jeremy Dhondy and Elena Jeronimidis in its usual place, is that Sally had lots to ships (held in even-numbered years) where

write, so this month her article has moved players represent their country and vie for a

to page 25. place at the World Championships, but the

Advertising Manager I must thank all those (see Letters Pages) ‘Open’ version, where participants are not

Fir Trees, Hall Road, Hainford, who have written in to comment on our subsidised by their bridge federations and

adsales@ebu.co.uk not as prestigious as the Teams Champion-

have since sent me their bridge stories;

they will appear in our October issue and ships, the European Open attracts a large

Printed by Wyndeham Roche Limited will, I hope, stimulate even more 75-year- number of top players and generates some

old bridge players to share their bridge ex- excellent bridge, as you can see from David

periences and love of the game with us all. Bird’s report on pages 22-23.

INSIDE GUIDE Sadly, this month the celebrations have

Bridge Fiction 7 n players, Michelle Brunner, and one of the This letter from Graham Sadie, Chelten-

Heather’s Hints 9 n most respected EBU tournament directors, ham, arrived too late to be included in the

Director, Please! 11 n Roland Bolton, both lost their long and Letters Pages, so here it is instead:

Traps for the Unwary 12-13 n valiant battle with cancer. Their obituaries ‘Because of a series of mishaps, only three

Caption Competition 13 n are on page 21. members of my Hubert Phillips team reached

Bridge with a Twist 15 n Worcester, home of our first-round oppo-

The European Scene nents. We expected to concede a walk-over,

With a few notable exceptions, England has Kennewell, Sue Evans and Dennis Loynes)

not had many successes at the European were so kind as to find a good friend of theirs,

Open Bridge Championships, which this Sue Lane, to join our team. As the Hubert

Obituaries 21 year were held in Poznan. So it’s very well Phillips is a pivot competition, that involved

2011 European Open 22-23 n done the ‘Badger’ team (Jeffrey Allerton, her playing for the first time with each of us.

EBU News and Diary 25-28 n Osborne) who, for the second consecutive the home team surely deserved to win, but

Letters to the Editor 31-32 n Mixed Teams. Congratulations also to Paul beginners’ luck. I write with some embarrass-

Around and About 34-35 n Simpson, Gunnar Hallberg, and Hans unfortunately did not prevail.

Bidding Quiz Answers 36-37 n Gothe from Sweden (competing as ‘Is there an award for such sportsmanship?’

The Debate 38-39 n ‘Pharon’ after the name of their sponsors, I should like to nominate the Worcester

Review 41 n for gaining silver in the Seniors Teams. which rewards sportsmanship in bridge. r

A Day in the Life & Top Tip