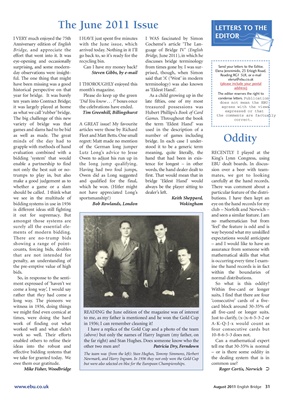 The June 2011 Issue LETTERS TO THE

Anniversary edition of English with the June issue, which Cochemé’s article ‘The Lan-

Bridge, and appreciate the arrived today. Nothing in it I’ll guage of Bridge IV’ (English

surprising, and some modern- Can I have my money back? from times gone by. I was sur- Send your letters to the Editor,

ful. The one thing that might said that ‘A’ (‘West’ in modern elena@ebu.co.uk

historical perspective on that month’s magazine. as ‘Eldest Hand’.

year for bridge. It was barely Please do keep up the green As a child growing up in the

ten years into Contract Bridge; ‘Did You know . . . ?’ boxes once late fifties, one of my most does not mean the EBU

it was largely played at home the celebrations have ended. trea s ured possessions was agrees with the views

as what we call ‘rubber’ bridge. Tim Greenhill, Billingshurst Hubert Phillips’s Book of Card expressed or that

the comments are factually

The big challenge of this new Games. Throughout the book correct.

variety of bridge was that A GREAT issue! My favourite the term ‘Eldest Hand’ was

as well as made. The great Fleet and Matt Betts. One small number of games including

minds of the day had to regret: Matt made no mention bridge. In each case I under- Oddity

evaluation combined with a Lutz Long’s advice to Jesse meaning, quite literally, the RECENTLY I played at the

bidding ‘system’ that would Owen to adjust his run up in hand that had been in exis- King’s Lynn Congress, using

enable a partnership to find the long jump quali fy ing. tence for longest – in other EBU dealt boards. In discus-

not only the best suit or no- Having had two foul jumps, words, the hand dealer dealt to sion over a beer with team-

trumps to play in, but also Owen did as Long suggested first. That would mean that in mates, we got to looking

make a good judgement as to and qualified for the final, bridge ‘Eldest Hand’ would carefully at the hand records.

whether a game or a slam which he won. (Hitler might always be the player sitting to There was comment about a

should be called. I think what not have appreciated Long’s dealer’s left. particular feature of the distri-

we see in the multitude of sportsmanship!) Keith Sheppard, butions. I have then kept an

bidding systems in use in 1936 Bob Rowlands, London Wokingham eye on the hand records for my

it out for supremacy. But and seen a similar feature. I am

amongst those sys tems are no mathematician but from

ments of modern bidding. way beyond what my unskilled

There are no-trump bids expectations would anticipate

counts, forcing bids, doubles assurance from someone with

that are not intended for mathematical skills that what

penalty, an understanding of is occurring every time I exam-

bids. within the boundaries of

So, in response to the senti- normal distributions.

ment expressed of ‘haven’t we So what is this oddity?

come a long way’, I would say Within five-card or longer

rather that they had come a suits, I find that there are four

long way. The pioneers we ‘consecutive’ cards of a five-

we might find even comical at READING the June edition of the magazine was of interest all five-card or longer suits.

work of finding out what in 1936; I can remember cleaning it! A-K-Q-J-x would count as

enabled others to refine their the far right) and Stan Hughes. Does someone know who the Can a mathematical expert

ideas into the robust and other two men are? Patricia Dry, Ferndown tell me that 30-35% is normal

effective bidding systems that The team was (from the left): Stan Hughes, Tommy Simmons, Herbert – or is there some oddity in

we take for granted today. We Newmark, and Harry Ingram. In 1936 they not only won the Gold Cup the dealing system that is in

owe them our gratitude. but were also selected en bloc for the European Championships. common use?