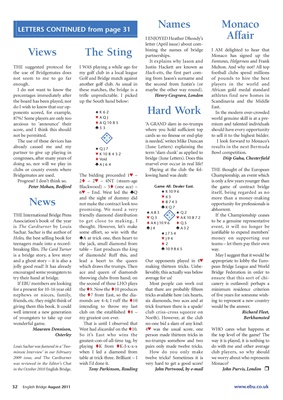 Views The Sting bining the names of bridge

I AM delighted to hear that

Monaco has signed up the

THE suggested protocol for I WAS playing a while ago for Justin Hackett are known as Multon. And why not? All top

the use of Bridgemates does my golf club in a local league Hack-etts, the first part com- football clubs spend millions

enough. another golf club. As usual in the second from Justin’s (or players in the world and

I do not want to know the these matches, the bridge is a maybe the other way round). African gold medal standard

the board has been played, nor up the South hand below: Scandinavia and the Middle

do I wish to know that our op- East.

Hard Work In the modern over-crowded

87%! Some players are only too world genuine skill is at a pre-

score, and I think this should ®53 where you hold sufficient top should have every opportunity

not be permitted. W

cards so no finesse or end-play to sell it to the highest bidder.

The use of these devices has S

is needed,’ writes Mike Duncan I look forward to Monaco’s

already caused me and my ´ QJ7

(June Letters) explaining the results in the next Bermuda

congresses, after many years of t Void bridge (June Letters). Does this Diip Guha, Chesterfield

doing so, nor will we play in ®AJ64 marvel ever occur in real life?

Bridgemates are used. The bidding proceeded 1™ – lowing hand was dealt: Championship, an event which

News not make the contract look too t 8743

opportunity for professionals is

Association’s book of the year to get close to making , I t A K J 10 9 6 t Q5 to be a genuine representative

is The Cardturner by Louis thought. However, let’s make ®J4 ®A32 event, it will no longer be

Sachar. Sachar is the author of some effort, so win with the ´ J754 justifiable to expend members’

Holes, the best selling book for ®A at trick one, then heart to ™ J94 money on supporting our

teenagers made into a record- the jack, small diamond from t2 teams – let them pay their own

is a bridge story, a love story of diamonds! Ruff this, and May I suggest that it would be

jolly good read! It has already which draws the trumps. Then making thirteen tricks. Unbe- pean Bridge League and World

encouraged some youngsters to ace and queen of diamonds lievably, this actually was below Bridge Federation in order to

try their hand at bridge. throwing clubs from hand; on average for us! ensure that this sort of chi -

If EBU members are looking the second of these LHO plays Most people can work out canery is outlawed: perhaps a

for a present for 10-16 year old the t9. Now the t10 produces that there are probably fifteen minimum residence criterion

nephews or nieces, family, the t7 from East, so the dia- tricks available here (six hearts, of five years for someone wish-

friends, etc. they might think of monds are 4-4; I ruff the t10 six diamonds, two aces and at ing to represent a new country

giving them this book. It could intending to throw my last trick fourteen there is a spade/ would be the answer.

of youngsters to take up our my greatest con ever. North). However, at the club Berkhamsted

wonderful game. That is until I observed that no-one bid a slam of any kind:

Maureen Dennison, West had discarded on the t10. 4™ was the usual score, one WHO cares what happens at

Osterley So it’s East who wins the person made thirteen tricks in the top level of the game? The

greatest-con-of-all-time tag, by no-trumps somehow and two way it is played, it is nothing to

Louis Sachar was featured in a ‘Two- playing tK from tK-J-x-x-x pairs only made twelve tricks. do with me and other average

minute Interview’ in our February when I led a diamond from How do you only make club players, so why should

2009 issue, and The Cardturner table at trick three. Brilliant – I twelve tricks? Sometimes it is we worry about who represents

was reviewed in the Editor’s Chat wish I’d done it. very hard to get a good score! Monaco?