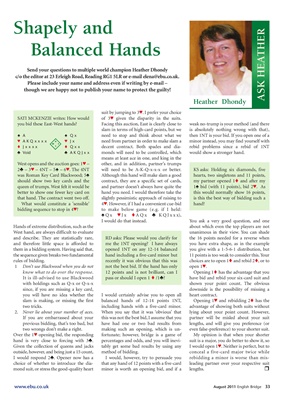 suit by jumping to 3™. I prefer your choice

SATI MCKENZIE writes: How would of 3™ given the disparity in the suits.

you bid these East-West hands? Facing this auction, East is clearly close to weak no-trump is your method (and there

slam in terms of high-card points, but we is absolutely nothing wrong with that),

´ A ´ Qx need to stop and think about what we then 1NT is your bid. If you open one of a

™ Jx need from partner in order to make slam a minor instead, you may find yourself with

t Qxx decent contract. Both spades and dia- rebid problems since a rebid of 1NT

® Void ® AKQJxx monds will need to be controlled, which would show a stronger hand.

means at least ace in one, and king in the

West opens and the auction goes: 1™ – other, and in addition, partner’s trumps

was Roman Key Card Blackwood; 5´ Although this hand will make slam a good hearts, two singletons and 11 points,

should show two key cards and the contract, they are a specific set of cards, my partner opened 1t and after my

queen of trumps. West felt it would be and partner doesn’t always have quite the 1´ bid (with 11 points), bid 2™. As

better to show one fewer key card on hand you need. I would therefore take the this would normally show 16 points,

that hand. The contract went two off. slightly pessimistic approach of raising to is this the best way of bidding such a

What would constitute a 'sensible' 4™. However, if I had a convenient cue-bid hand?

bidding sequence to stop in 4™? to make below game (e.g. if I held:

I would do that instead. You ask a very good question, and one

Hands of extreme distribution, such as the about which even the top players are not

West hand, are always difficult to evaluate unanimous in their view. You can shade

and describe. They are statistically rare, RD asks: Please would you clarify for the 16 points needed for a reverse when

and therefore little space is afforded to me the 1NT opening? I have always you have extra shape, as in the example

the sequence given breaks two fundamental hand including a five-card minor but 11 points is too weak to consider this. Your

rules of bidding. recently it was obvious that this was choices are to open 1t and rebid 2t, or to

1 Don’t use Blackwood when you do not not the best bid. If the hand has only open 1™.

know what to do over the res ponse. 12 points and is not brilliant, can I Opening 1t has the advantage that you

It is ill-advised to use Black wood pass or should I open 1 t /1®? have bid and rebid your six-card suit and

with holdings such as Q-x or Q-x-x shown your point count. The obvious

since, if you are missing a key card, downside is the possibility of missing a

you will have no idea whether the I would certainly advise you to open all heart contract.

slam is making, or missing the first balanced hands of 12-14 points 1NT, Opening 1™ and rebidding 2t has the

two tricks. including hands with a five-card minor. advantage of showing both suits without

2. Never lie about your number of aces. When you say that it was ‘obvious’ that lying about your point count. However,

If you are embarrassed about your this was not the best bid, I assume that you partner will be misled about your suit

previous bidding, that’s too bad, but have had one or two bad results from lengths, and will give you preference (or

two wrongs don’t make a right. making such an opening, which is un- even false-preference) to your shorter suit.

Over the 1™ opening bid, the responding fortunate; however, bridge is a game of My opinion is that when your shorter

hand is very close to forcing with 3®. percentages and odds, and you will inevi- suit is a major, you do better to show it, so

Given the collection of queens and jacks tably get some bad results by using any I would open 1™. Neither is perfect, but to

outside, however, and being just a 15 count, method of bidding. conceal a five-card major twice while

I would respond 2®. Opener now has a I would, however, try to persuade you rebidding a minor is worse than mis -

mond suit, or stress the good-quality heart minor is worth an opening bid, and if a lengths. r