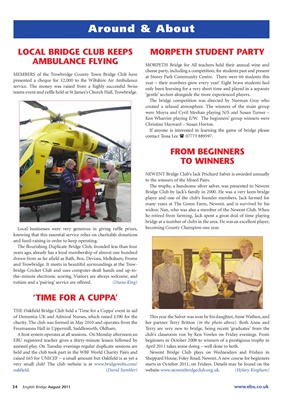 cheese party, including a competition, for students past and present

MEMBERS of the Trowbridge County Town Bridge Club have

at Storey Park Community Centre. There were 66 students this

presented a cheque for £2,000 to the Wiltshire Air Ambulance

year – their numbers grow every year! Eight brave students had

service. The money was raised from a highly successful Swiss

The bridge competition was directed by Norman Gray who

created a relaxed atmosphere. The winners of the main group

were Moyra and Cyril Meehan playing N/S and Susan Turner –

If anyone is interested in learning the game of bridge please

to the winners of the Mixed Pairs.

The trophy, a handsome silver salver, was presented to Newent

Bridge Club by Jack’s family in 2000. He was a very keen bridge

player and one of the club’s founder members. Jack farmed for

many years at The Green Farm, Newent, and is survived by his

widow, Nan, who was also a member of the Newent Club. When

he retired from farming, Jack spent a great deal of time playing

bridge at a number of clubs in the area. He was an excellent player,

knowing that this essential service relies on charitable donations

and fund-raising in order to keep operating.

years ago, already has a loyal membership of almost one hundred

and Trowbridge. It meets in beautiful surroundings at the Trow-

tuition and a ‘pairing’ service are offered. (Diana King)

‘TIME FOR A CUPPA’

of Dementia UK and Admiral Nurses, which raised £390 for the This year the Salver was won by his daughter, Anne Wathen, and

charity. The club was formed in May 2010 and operates from the her partner Terry Britton (in the photo above). Both Anne and

Freemasons Hall in Uppermill, Saddleworth, Oldham. Terry are very new to bridge, being recent ‘graduates’ from the

A host system operates at all sessions. On Monday afternoon an club’s classroom run by Ken Vowles on Friday evenings. From

raised £65 for UNICEF – a small amount but Oakfield is as yet a Sheppard House, Foley Road, Newent. A new course for beginners

very small club! The club website is at www.bridgewebs.com/ starts in October 2011, on Fridays. Details may be found on the