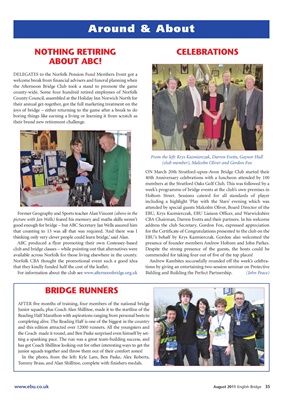 DELEGATES to the Norfolk Pension Fund Members Event got a

welcome break from financial advisers and funeral planning when

the Afternoon Bridge Club took a stand to promote the game

County Council, assembled at the Holiday Inn Norwich North for

their annual get-together, got the full marketing treatment on the

40th Anniversary celebrations with a luncheon attended by 100

members at the Stratford Oaks Golf Club. This was followed by a

Holtom Street. Sessions catered for all standards of player

including a highlight ‘Play with the Stars’ evening which was

attended by special guests Malcolm Oliver, Board Director of the

picture with Jan Wells) feared his memory and maths skills weren’t CBA Chairman, Darren Evetts and their partners. In his welcome

that counting to 13 was all that was required. ‘And there was I for the Certificate of Congratulations presented to the club on the

club and bridge classes – while pointing out that alternatives were Despite the strong presence of the guests, the hosts could be

available across Norfolk for those living elsewhere in the county. commended for taking four out of five of the top places!

that they kindly funded half the cost of the leaflet. tions by giving an entertaining two-session seminar on Protective

For information about the club see www.afternoonbridge.org.uk Bidding and Building the Perfect Partnership. (John Peace)

AFTER five months of training, four members of the national bridge

Junior squads, plus Coach Alan Shillitoe, made it to the startline of the

Reading Half Marathon with aspirations ranging from personal bests to

completing alive. The Reading Half is one of the biggest in the country

and this edition attracted over 12000 runners. All the youngsters and

the Coach made it round, and Ben Paske surprised even himself by set-

ting a spanking pace. The run was a great team-building success, and

junior squads together and throw them out of their comfort zones!

In the photo, from the left: Kyle Lam, Ben Paske, Alex Roberts,