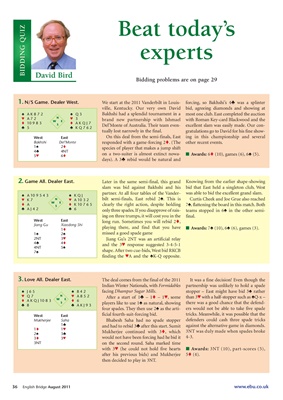 ville, Kentucky. Our very own David bid, agreeing diamonds and showing at

´ AK872 ´ Q3 Bakhshi had a splendid tournament in a most one club. East completed the auction

Del’Monte of Australia. Their team even- excellent slam was easily made. Our con-

tually lost narrowly in the final. gratulations go to David for his fine show-

West East On this deal from the semi-finals, East ing in this championship and several

Bakhshi Del’Monte responded with a game-forcing 2t. (The other recent events.

1´ 2t species of player that makes a jump shift

days). A 3® rebid would be natural and

2. Game All. Dealer East. Later in the same semi-final, this grand Knowing from the earlier shape-showing

slam was bid against Bakhshi and his bid that East held a singleton club, West

partner. At all four tables of the Vander- was able to bid the excellent grand slam.

ing on three trumps, it will cost you in the final.

finding the ™A and the ´K-Q opposite.

3. Love All. Dealer East. The deal comes from the final of the 2011 It was a fine decision! Even though the

Indian Winter Nationals, with Formidables partnership was unlikely to hold a spade

players like to use 1´ as natural, showing there was a good chance that the defend-

four spades. They then use 2´ as the arti- ers would not be able to take five spade

West East ficial fourth-suit-forcing bid. tricks. Meanwhile, it was possible that the

1® and had to rebid 3® after this start. Sumit against the alternative game in diamonds.

Mukherjee continued with 3t, which 3NT was duly made when spades broke

3NT on the second round. Saha marked time

after his previous bids) and Mukherjee 5t (4).

then decided to play in 3NT.