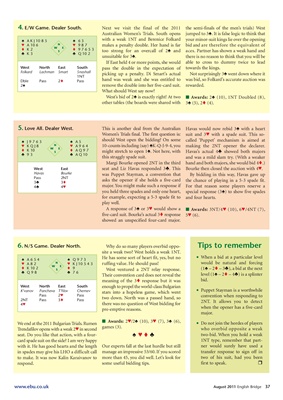 4. E/W Game. Dealer South. Next we visit the final of the 2011 the semi-finals of the men’s trials) West

Australian Women’s Trials. South opens jumped to 3´. It is false logic to think that

™ 987 makes a penalty double. Her hand is far bid and are therefore the equivalent of

t 97653 too strong for an overcall of 2´ and aces. Partner has shown a weak hand and

unsuitable for 3´. there is no reason to think that you will be

If East held 4 or more points, she would able to cross to dummy twice to lead

West North East South pass the double in the expectation of towards the kings.

picking up a penalty. Di Smart’s actual Not surprisingly 3´ went down where it

Dble Pass 2t Pass hand was weak and she was entitled to was bid, so Folkard’s accurate auction was

2´ remove the double into her five-card suit. rewarded.

What should West say now?

5. Love All. Dealer West. This is another deal from the Australian Havas would now rebid 3´ with a heart

Women’s Trials final. The first question is: suit and 3™ with a spade suit. This so-

´ J9763 ´ A5 should West open the bidding? On some called ‘Puppet’ mechanism is aimed at

this straggly spade suit. and was a mild slam try. (With a weaker

Margi Bourke opened 2NT in the third hand and both majors, she would bid 4t.)

West East seat and Liz Havas responded 3®. This Bourke then closed the auction with 4™.

Havas Bourke was Puppet Stayman, a convention that By bidding in this way, Havas gave up

asks the opener if she holds a five-card the chance of playing in a 5-3 spade fit.

4® 4™ major. You might make such a response if For that reason some players reserve a

you held three spades and only one heart, special response (3´) to show five spades

for example, expecting a 5-3 spade fit to and four hearts.

6. N/S Game. Dealer North. Why do so many players overbid oppo- Tips to remember

bid at a particular level

meaning of the 3t response but it was bid.

stars into a hopeless game, which went • Puppet Stayman isresponding to

2NT Pass 3t Pass two down. North was a passed hand, so

there was no question of West bidding for 2NT. It allows you to detect

pre-emptive reasons. when the opener has a five-card

We end at the 2011 Bulgarian Trials. Rumen

Trendafilov opens with a weak 2™ in second

card spade suit on the side? I am very happy 1NT type, remember that part-

with it. He has good hearts and the length Our experts fall at the last hurdle but still ner would surely have used a

in spades may give his LHO a difficult call manage an impressive 53/60. If you scored transfer response to sign off in

to make. It was now Kalin Karaivanov to more than 45, you did well. Let’s look for two of his suit, had you been