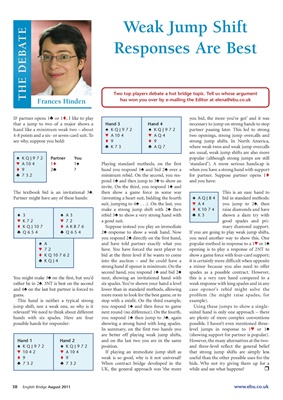 Frances Hinden has won you over by e-mailing the Editor at elena@ebu.co.uk

hand like a minimum weak two – about ´ KQJ972 ´ KQJ972 partner passing later. This led to strong

´ KQJ972 Partner You popular (although strong jumps are still

® 732 minimum rebid. On the second, you res- for partner. Suppose partner opens 1t

invite. On the third, you respond 1´ and

The textbook bid is an invitational 3´. then show a game force in some way This is an easy hand to

Partner might have any of these hands: (inventing a heart suit, bidding the fourth ´ AQJ84 bid in standard methods:

you respond 2´ directly on the first hand, you need another way to show this. One

™ 72 have. You have forced the next player to opening is to play a response of 2NT to

strong hand if opener is minimum. On the a minor because you also need to offer

second hand, you respond 1´ and bid 2´ spades as a possible contract. However,

You might make 3´ on the first, but you’d next, showing an invitational hand with this is a very rare hand compared to a

rather be in 2´. 3NT is best on the second six spades. You’ve shown your hand a level weak response with long spades and in any

and 4´ on the last but partner is forced to lower than in standard methods, allowing case opener’s rebid might solve the

guess. more room to look for the best game, or to problem (he might raise spades, for

This hand is neither a typical strong stop with a misfit. On the third example, example).

jump shift, nor a weak one, so why is it you respond 1´ and then force to game Using these jumps to show a single-

relevant? We need to think about different next round (no difference). On the fourth, suited hand is only one approach – there

hands with six spades. Here are four you respond 1´ then jump to 3´, again are plenty of more complex conventions

In summary, on the first two hands you level jumps in response to 1™ or 1´

are better off playing weak jump shifts, (showing support for partner is popular).

Hand 1 Hand 2 and on the last two you are in the same However, the many alternatives at the two-

t 9 t 9 weak is so good, why is it not universal? useful than the other possible uses for the

UK, the general approach was ‘the more while and see what happens? r