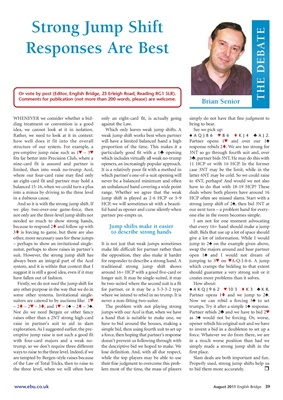 WHENEVER we consider whether a bid- only an eight-card fit, is actually going simply do not have that fine judgment to

ding treatment or convention is a good against the Law. bring to bear.

idea, we cannot look at it in isolation. Which only leaves weak jump shifts. A Say we pick up:

structure of our system. For example, a proportion of the time. This makes it a response rebids 2t. We are too strong for

pre-emptive jump raise such as 1™ – 3™ particularly good fit with a 1® opening 3NT so go through fourth suit and, over

fits far better into Precision Club, where a which includes virtually all weak no-trump 3®, partner bids 3NT. He may do this with

nine-card fit is assured and partner is openers, an increasingly popular approach. 11 HCP or with 16 HCP. In the former

limited, than into weak no-trump Acol, It is a relatively poor fit with a method in case 3NT may be the limit, while in the

where our four-card raise may find only which partner's one-of-a-suit opening will latter 6NT may be cold. So we could raise

an eight-card fit and partner may hold a never be a balanced minimum and often to 4NT, perhaps? And would we not also

balanced 15-16, when we could turn a plus an unbalanced hand covering a wide point have to do that with 18-19 HCP? These

into a minus by driving to the three level range. Whether we agree that the weak deals where both players have around 16

in a dubious cause. jump shift is played as 2-6 HCP or 5-9 HCP often see missed slams. Start with a

we play two-over-one game-force, then ful hand as opener and curse silently when our next turn – a problem hand for every-

not only are the three-level jump shifts not partner pre-empts us. one else in the room becomes simple.

needed so much to show strong hands, I am not for one moment advocating

3t is forcing to game, but there are also to describe strong hands shift. Bids that use up a lot of space should

other, more necessary uses for these jumps give a lot of information. While I would

– perhaps to show an invitational single- It is not just that weak jumps sometimes jump to 2´ on the example given above,

suiter, perhaps to show raises in partner's make life difficult for partner rather than swap the majors around and hear partner

suit. However, the strong jump shift has the opposition, they also make it harder open 1´ and I would not dream of

always been an integral part of the Acol for responder to describe a strong hand. A jumping to 3™ on ™A-Q-J-8-6. A jump

system, and it is within that context that I traditional strong jump shift shows which cramps the bidding to that extent

suggest it is still a good idea, even if it may around 16+ HCP with a good five-card or should guarantee a very strong suit or it

have fallen out of fashion. longer suit. It may be single-suited, it may creates more problems than it solves.

Firstly, we do not need the jump shift for be two-suited where the second suit is a fit How about:

some other systems. Invitational single- where we intend to rebid in no trump. It is Partner opens 1t and we jump to 2´.

suiters are catered to by auctions like: 1™ never a non-fitting two-suiter. Now we can rebid a forcing 3´ to set

Nor do we need Bergen or other fancy jumps with our Acol is that, when we have Partner rebids 2® and we have to bid 2™

raises other than a 2NT strong high-card a hand that is suitable to make one, we as 3´ would not be forcing. Or, worse,

raise in partner's suit to aid in slam have to bid around the houses, making a opener rebids his original suit and we have

exploration. As I suggested earlier, the pre- simple bid, then using fourth suit to set up to invent a bid in a doubleton to set up a

emptive jump raise is not such a good fit a force, then hoping that partner's response force. Whatever we do from there, we are

trump, so we don't require three different the descriptive bid we hoped to make. We simply made a strong jump shift in the

ways to raise to the three level. Indeed, if we lose definition. And, with all due respect, first place.

are tempted by Bergen-style raises because while the top players may be able to use Slam deals are both important and fun.

of the Law of Total Tricks, then to raise to their fine judgment to overcome this prob- Properly used, strong jump shifts help us

the three level, when we will often have lem most of the time, the mass of players to bid them more accurately. r